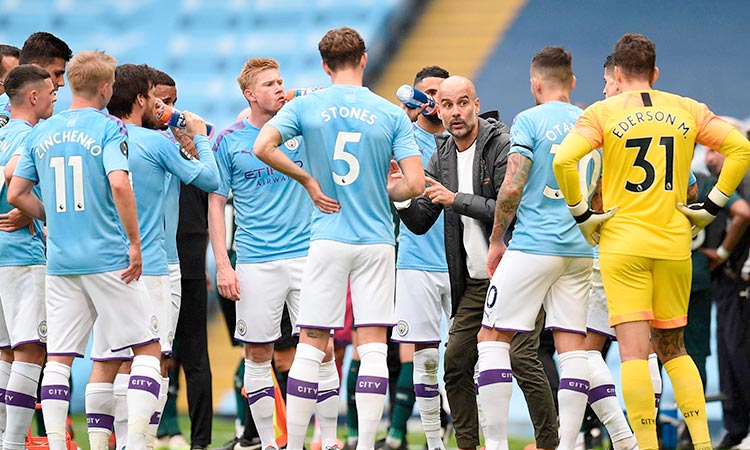 Manchester City welcomed the decision, which will have huge ramifications for the club’s finances and potentially the future of manager Pep Guardiola and star players. File / Agence France-Presse

FFP regulations aim to stop clubs running big losses through spending on players but, after 11 years, UEFA was already examining possible changes before the Court of Arbitration for Sport (CAS) backed City’s appeal against a two-year ban.

UEFA accused City of “serious breaches” of its FFP rules in information submitted to the governing body between 2012 and 2016 and banned the club from European competition for two years.

But CAS ruled that those allegations were either “unproven” or “time barred”, as UEFA’s own rules placed a five-year statute of limitations on prosecutions.

Some of the cases may also have been covered under a “settlement agreement” UEFA and City entered into after a previous probe ended in 2014.

It will not be clear until CAS’s full decision is published in the coming days how many of the cases were ruled out as time-barred and how many were unproven. But the fact that such a high-profile case ended in failure for UEFA -- with even City’s fine for “non-cooperation” with the investigation cut by the two thirds to 10 million euros ($11.33 million) -- is a defeat for UEFA’s Club Financial Control Body (CFCB).

The ruling did not, however, make a judgment on the FFP system itself.

“There is no suggestion of a finding that the legal basis of FFP is somehow invalid. That means that whilst this result may embarrass UEFA, it does not appear to undermine the legality of the FFP rules themselves,” Christopher Flanagan, managing editor of the International Sports Law Journal, told Reuters.

LIKELY CHANGE: UEFA was quick to defend the FFP system, which was introduced by the European governing body’s former president Michel Platini in 2009.

“Over the last few years, Financial Fair Play has played a significant role in protecting clubs and helping them become financially sustainable and UEFA and ECA (European Club Association) remain committed to its principles,” UEFA said in a statement.

But at UEFA’s congress in Amsterdam in March, the body’s president, Aleksander Ceferin said the system is likely to be changed.

“Its too early to say how it will look in the future but we are thinking about it and will probably have to adapt,” he told reporters.

City welcomed the decision, which will have huge ramifications for the club’s finances and potentially the future of manager Pep Guardiola and star players such as Kevin De Bruyne and Raheem Sterling.

“Whilst Manchester City and its legal advisors are yet to review the full ruling by the Court of Arbitration for Sport (CAS), the club welcomes the implications of today’s ruling as a validation of the club’s position and the body of evidence that it was able to present,” City said in a statement.

“The club wishes to thank the panel members for their diligence and the due process that they administered.”

Since Sheikh Mansour Bin Zayed Al Nahyan, Deputy Prime Minister and Minister of Presidential Affairs, takeover 12 years ago, City’s fortunes have been transformed from perennially living in the shadow of local rivals Manchester United to winning four Premier League titles in the past eight years among 11 major trophies.

More silverware could come before the end of the season as Guardiola’s side face Arsenal in the FA Cup semi-finals on Saturday before restarting their Champions League campaign in August, holding a 2-1 lead over Real Madrid from the first leg of their last-16 tie.

On Saturday, they secured qualification for the Champions League for a 10th consecutive season with a 5-0 win at Brighton.

“We deserve to be there because we won it on the pitch,” said Guardiola ahead of Monday’s ruling.