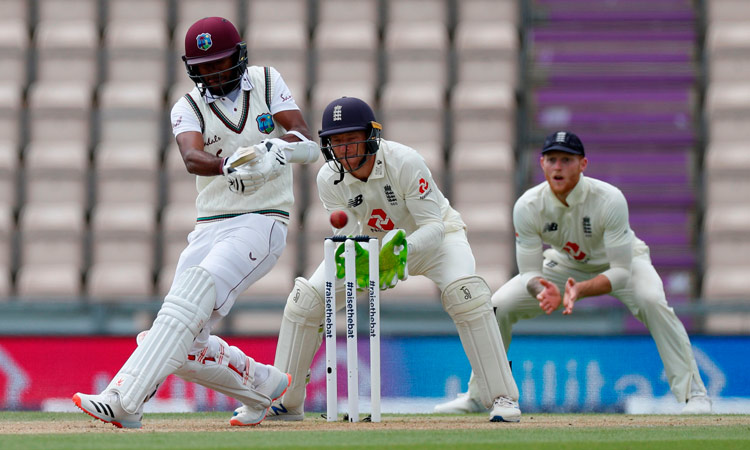 Kraigg Brathwaite plays a shot on the third day of the first Test match between England and the West Indies at the Ageas Bowl on Friday. AFP

The tourists lost Shamarh Brooks (39) and Jermaine Blackwood (12) soon after lunch to slip to 186-5 in reply to England's 204 all out, but recovered through Chase (27 not out) and Dowrich (30 not out) to be in a strong position to build a healthy lead at an empty Ageas Bowl.

Captain Jason Holder is among the five wickets in hand as England prepares to take the new ball, with its two quickest bowlers - Jofra Archer and Mark Wood - awaiting their first wickets.

James Anderson was involved in both of the wickets in the second session, firstly finding Brooks' edge for a caught behind. Brooks decided to review but UltraEdge showed a clear nick.

Five overs later, Anderson took a simple catch at mid-on to remove Blackwood, who tried to launch spinner Dom Bess into the deep. Anderson and Bess both had two wickets in the innings.