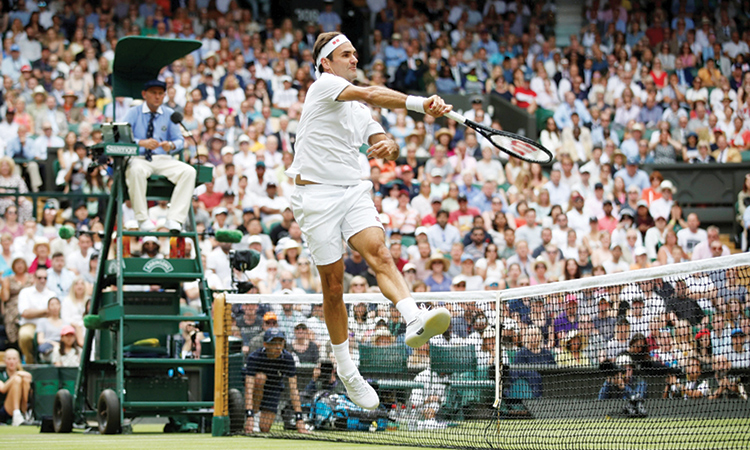 Roger Federe in action during a match. File

Roger Federer, who turns 39 next month, says he hopes to play again in front of crowds as he targets his comeback from a knee injury in 2021.

He had another procedure on his right knee in June but hopes to return in 2021 even though he will turn 40 in August next year.

"I want to come back healthy. We'll see how long that lasts," he told German weekly newspaper Die Zeit.

The Swiss ace says he has missed tennis more than ever since the coronavirus pandemic first hit and forced a shutdown of the sport in March.

"In the beginning it wasn't like that," he said. "There was nothing we could do anyway, we were just especially glad that we weren't ill and that all our friends and family were doing well. "But now I miss it, I'd love to be in a full stadium again."

After a career which has yielded eight Wimbledon titles in a total of 20 Grand Slams, the last of which was the 2018 Australian Open, Federer knows his career is drawing to a close.

"I'm going miss it when I retire," he added, but hoping fans will eventually be allowed to watch live tennis in stadiums again, despite COVID-19.

"It'll come back. We just have to be patient now."

Recently, Federer finished above Lionel Messi and Cristiano Ronaldo to become the highest-earning athlete of 2019, according to Forbes.

"Maybe it's good for tennis that we can compete" with other sports, said Federer, who Forbes claim earned $106 million last year, mostly through endorsements.

"But I'm rather embarrassed when it's in the papers," admitted Federer.