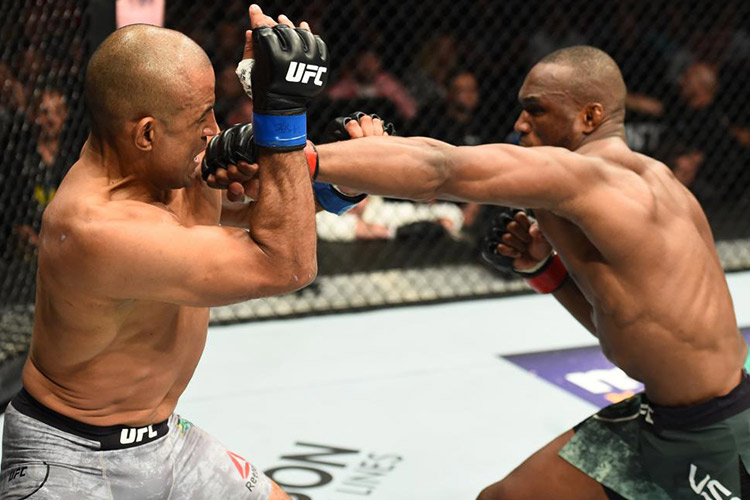 Kamaru Usman (right) fights an openent inside the Octagon. File

Championship tripleheader kicks off the UFC's run on Fight Island on July 11, as UFC 251 takes place at Yas Island.

Headlining this star-studded card is a battle for the welterweight crown as Kamaru Usman defends his title against Jorge Masvidal. Plus, it's a rematch for the featherweight belt when Alexander Volkanovski faces the man he defeated for the title, Hawaiian superstar Max Holloway, and Petr Yan and Jose Aldo square off for the vacant bantamweight championship. Two former strawweight champions will also meet again, as Jessica Andrade takes on Rose Namajunas.

Champion Usman searches for his second consecutive successful title defence as he puts the welterweight strap on the line against BMF titleholder Masvidal in a blockbuster championship clash that now serves as Saturday night’s main event.

Last year was a breakout campaign for Usman, who claimed the title with a dominant win over Tyron Woodley in March and followed it up by finishing Colby Covington late in the fifth round of their clash at UFC 245. The Nigeria native has now won 15 consecutive fights, including all 10 of his appearances inside the Octagon, and continues to show new wrinkles and previously unexposed depth to his repertoire with each contest.

The bout against Covington was particularly illuminating as Usman showed his toughness, heart, and tenacity in the midst of his first real back-and-forth battle since arriving in the UFC. Locked in a close fight heading into the final round, the champion pressed forward and put away the game challenger, silencing his critics and solidifying his place atop the division at the same time.

Masvidal, who jumped at the opportunity to replace Gilbert Burns when the streaking Brazilian was forced out of this weekend’s championship main event late last week, also had his breakout campaign in 2019.

The 18-year veteran kicked off the year with a second-round knockout victory over Darren Till in London, followed it up with a five-second, flying-knee knockout of Ben Askren, and then wrapped the year up by claiming the BMF title in a one-sided beatdown of Nathan Diaz. On top of that, he introduced several new phrases into the MMA lexicon, including “three piece and a soda,” “super necessary,” and “Street Jesus.”

Besides the animosity between these two, what makes this matchup so compelling is the contrasting styles they bring to the cage. Usman is all about pressure and putting his opponents on the canvas, drowning them with takedowns, mat returns, and a pace that few are able to match. Conversely, Masvidal has traditionally been a counter fighter with exceptional takedown defense, though he’s been more aggressive with his striking as of late.

Each believes they are the best fighter in the world. Each sees the other as an imposter masquerading as an elite competitor. Each has a genuine dislike for the other.

Saturday night might not settle all their differences, but it will determine who will lead the way for the welterweight division in the second half of 2020 and beyond.

Last December, right before Usman squared off with Covington and retained his welterweight title, Alexander Volkanovski walked into the Octagon and ended Max Holloway’s reign atop the featherweight division.

This weekend, right before Usman squares off with Burns, Volkanovski will walk into the Octagon aiming to maintain his place atop the 145-pound weight class as former champion Holloway looks to return the favor.

The first non-title fight on the main card just so happens to be a rematch of a championship fight from last spring, one that saw Jessica Andrade end Rose Namajunas’ reign atop the strawweight division. After initially being slated to happen earlier this year, the highly-ranked women will finally run it back this weekend.

Andrade has competed just once since her first encounter with Namajunas and it lasted all of 42 seconds as she was bum-rushed by Zhang Weili the instant their championship clash began last August in Shenzhen, China. Just 112 days after experiencing the highest of professional highs, the Brazilian with big power was dealing with a whirlwind loss that had to have left her head spinning.

Now, close to a year after that setback, Andrade is back to renew acquaintances with Namajunas in a bout that could very well determine the next title challenger in the 115-pound weight class.

Saturday’s bout will be Namajunas’ first since her initial encounter with Andrade. While most people remember the high amplitude slam that ended their first meeting, Namajunas dominated the first round of her first meeting with Andrade, working behind a swift jab and sharp footwork, and actually successfully defending the challenger’s first attempt to hoist her into the air and send her crashing to the canvas.

The way that first bout at UFC 237 played out is the same thing that makes this rematch so intriguing, as Namajunas looked tremendous right up until the point where Andrade successfully navigated her way inside and looked to use her strength. The blueprint for success remains the same on both sides, as it will once again come down to who is able to dictate the terms of engagement.

Saturday’s pay-per-view kicks off in the flyweight division, as streaking rising star Amanda Ribas squares off with the returning Paige VanZant in a clash that is sure to set the tempo for the remainder of the main card.

The 26-year-old Ribas made her promotional debut at the end of June last year, dominating Emily Whitmire on the ground and forcing her to tap to a rear-naked choke two minutes into the second round. Since then, the Brazilian has added decision wins over Mackenzie Dern and Randa Markos to push her record to 9-1 overall and establish herself as one of the top emerging talents on the roster.

It’s been a long, frustrating couple of years for VanZant, who suffered a broken arm in her January 2018 loss to Jessica-Rose Clark, returned a year later to secure a submission win over Rachael Ostovich, but hasn’t fought since after dealing with further fractures to her arm. Still just 26 herself, VanZant is 2-2 since competing on Dancing with the Stars and 5-3 overall inside the Octagon, making this a crucial matchup as she looks to re-establish herself as a potential threat in the flyweight division.