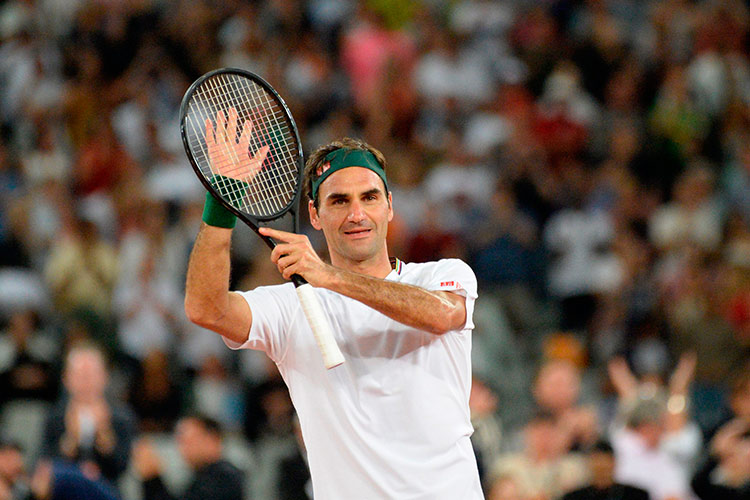 Roger Federer waves to spectators during a match. File

Roger Federer on Monday said he is "missing" Wimbledon after the grass-court Grand Slam was cancelled, but hopes to play the tournament in 2021.

The 38-year-old, who has undergone two knee surgeries this year, had already announced he will not play again until next year.

The 20-time Grand Slam champion revealed he underwent couple of knee surgeries in the last two months and spent majority of the time recuperating from it in his home nation.

"For me, it's been very nice to be in Switzerland for as long as I have been since the lockdown," Federer was quoted as saying by Tennis World.

"Personally, it has been very pleasant to stay in the same place for a long time, I hadn't experienced that for more than 25 years," Federer said at the launch of the "Roger Center Court" running shoes created by Swiss brand On.

"The life quality in Switzerland is great, now we have summer and the people who spend time outside, just like we do. The last couple of months were dominated by two knee surgeries. I had to take step by step, going with the rehab and slow recovery," he added.

"But of course I miss Wimbledon, of course I would like to be there currently playing on Centre Court for a place in the second week.

"Clearly, one of my big goals, and that's why I do recovery work every day and work so hard, and why I'm preparing for a 20-week physical preparation block this year, is because I hope to play at Wimbledon next year."

Federer said the coronavirus lockdown gave him the chance to recuperate following surgery, but said he will have to be "patient" as he waits to return to the court.

"Combined with my operations, it was an important moment for me, (to know) if I wanted to continue," he said. "It's very easy to say but it's a long way to come back, you have to be patient, it also was a time for reflection. "We were in the mountains, isolated, we didn't see anyone, I didn't see my parents for almost three months, we were very serious and strict."

The ATP and WTA Tours are set to resume in August despite a raft of professional players having contracted COVID-19.

Federer could have lost his record of most men's Grand Slam singles titles by the time he returns, with his old rival Rafael Nadal just one behind on the all-time list.

The US Open will be the first Grand Slam following the restart, getting underway behind closed doors in New York on Aug.31, before the French Open starts, with fans allowed to attend Roland Garros, on Sept.24.

The Swiss star will also be hoping to claim Olympic singles gold for the first time next year at the postponed Tokyo Olympics in Japan, with the final to be played a week before his 40th birthday.

With recovery underway, Federer expects himself to return to full fitness before the 2021 season. Federer had earlier announced via his Twitter handle in June that he had to undergo an 'additional arthroscopic procedure' on his knee that will see him miss the revamped 2020 tennis calendar.

"I must say I feel much better already, I'm not at the level where I can play tennis fully yet, but I'm confident about being at 100 per cent ahead of the next season," he said.