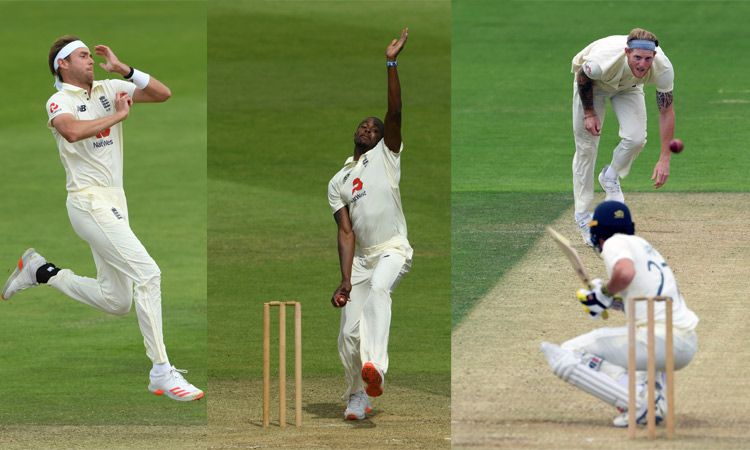 England's Stuart Broad , Jofra Archer and Ben Stokes bowl during day three of a Warm Up match at the Ageas Bowl in Southampton, England. AP

With the coronavirus pandemic having brought the world game to a halt in March, there were fears this three-Test campaign might also fall victim to COVID-19.

But, with the West Indies agreeing to go ahead despite Britain's virus death toll of over 44,000 being the highest in Europe, the series is set to mark cricket's return from lockdown instead.

However, a number of anti-virus measures mean next week's match will look like few others in 143 years of Test-match history.

For a start, both sides will be staying at on-site hotels at Southampton's Ageas Bowl and Old Trafford in Manchester — the venue for the second and third Tests — in a series originally scheduled for elsewhere in England in June.

England have already settled in at the Ageas Bowl, where they played a three-day intra-squad match this week as the West Indies continued their preparations at Old Trafford.

Mark Wood, the England fast bowler, said the environment, "feels a bit like a sci-fi movie," with players subjected to repeated health checks.

"There is hand sanitiser at every turn, and on the floor there are arrows, lines and footprints to show the way to go," Wood told the BBC.

He added meal times were "like being back at school," with players at individual desks "looking at the back of the person in front." But perhaps the most visible change will be the lack of any spectators.

For while sparse crowds are not unknown in Test cricket — particularly when Pakistan play 'home' games in the United Arab Emirates — this series will be a completely behind closed doors affair.

That does help officials to honour lucrative broadcast contracts and so eliminate a 'nightmare scenario' of no cricket at all this season that, according to its own estimates, could cost the England and Wales Cricket Board £252 million ($309 million).

Meanwhile, Cricket West Indies president Ricky Skerritt insisted a $3 million loan from the ECB was a "helping hand" at a time of economic crisis rather than a condition of touring England.

Quite how the lack of atmosphere, as well as being cooped up on the ground at night, will affect the players is uncertain, with West Indies captain Jason Holder admitting he would miss England's loudest fans.

England batsman Ollie Pope, however, was adamant the teams would have no trouble in maintaining the standards associated with cricket's pinnacle format.

"Even if there's not a single person in the crowd it's still what we all dreamt of doing," he said.

"When that Test match starts up, crowd or no crowd, you are going to be really up for it."

Players will be barred from using saliva to shine the ball, although overhead conditions could still mean there's swing for the faster bowlers.

The series will also take place against the backdrop of recent worldwide Black Lives Matter protests, with both teams set to have a BLM logo on their shirts.

But amid all the changes, which includes provision for virus substitutes if required, there will be a return to cricket's past.

Travel restrictions mean there are set to be two on-field home umpires in a Test for the first time since 2002 when the International Cricket Council made neutral match officials mandatory in the five-day game.

Yet concerns about the alterations are outweighed by a sense of relief that the series is still going ahead.

England captain Joe Root — before it was confirmed he would miss the first Test to attend the birth of his second child — summed up the mood by saying: "I think the whole cricketing world will be grateful to see some cricket again."