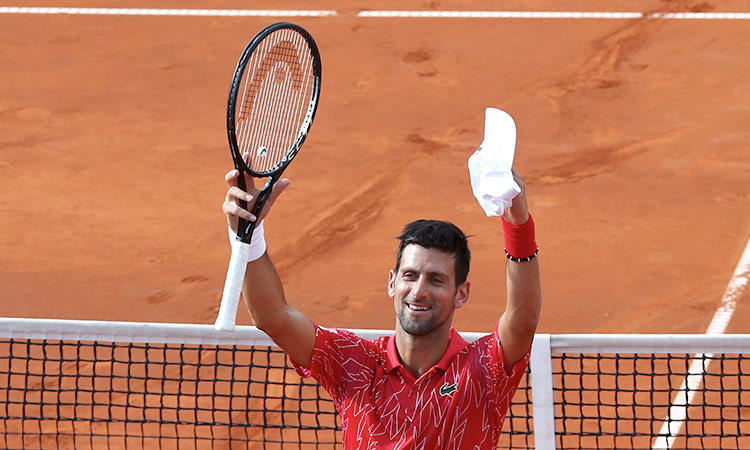 World number one Novak Djokovic lost one of his two opening singles matches on Saturday at the charity tournament he organised, and his day got worse when news broke that one of the event’s four legs has been scrapped due to coronavirus concerns.

The Montenegro leg was due to be the third stop on June 27 and 28 after Croatia and before the conclusion in Bosnia.

However, that blow didn’t deter fans from hailing the 33-year-old, 17-time Grand Slam title winner’s brainchild as having made Belgrade into the temporary “capital” of world tennis.

The Adria Tour, which features world number one Djokovic, as well as third-ranked Dominic Thiem, number seven Alexander Zverev and Grigor Dimitrov, the world 19, got underway on Saturday.

A spokesman for the organisers said the visit to neighbouring Montenegro was called off when it became apparent Serbia did not match strict health guidelines.

“The fact that citizens of Serbia are not on the list of the Montenegrin public health institute, and cannot travel to Montenegro, is an insurmountable obstacle,” organisers said in a statement.

Shortly after beating fellow Serbian Viktor Troicki in his opening match, Djokovic said he was disappointed that the Adria Tour’s third leg in Montenegro had been called off.

“I am so sad for the Montenegro leg,” he told the Balkan nation’s Sport Klub television in a courtside interview in front of a capacity 4,000 crowd.

“We tried everything, but the borders are still not open and we don’t have time to organise it all.”

With 12,251 confirmed cases and 253 deaths related to COVID-19, Serbia is among the countries whose residents are not allowed to travel to its southern neighbour Montenegro.

Earlier on Saturday, Djokovic’s younger brother Djordje and the Adria Tour director, released a statement saying the event’s board had decided to scrap the Montenegro leg.

Asked at a news conference after his defeat by Filip Krajinovic whether there was an alternative host nation able to replace Montenegro in a fortnight, Djokovic said:

“We are looking at several alternative options and locations which I don’t want to reveal at this point.

“We are running out of time so we will know where we stand either tomorrow or the day after.”

The second leg will be held in Croatia’s coastal resort of Zadar on June 20-21 and the final one in Bosnia’s Banja Luka on July 3-4.

The tournament, organised by Djokovic while international tennis remains suspended due to the COVID-19 pandemic, has drawn some household names and adopted a more streamlined format than the main tour events.

Sets have been slashed to the best of seven games, with eight players competing in two pools on a round-robin basis.

Second seed and Austrian world number three Dominic Thiem beat Damir Dzumhur in minutes as the Bosnian retired in the opening set with a hamstring injury, but had to save a match point in his 1-4, 4-1, 4-3 win over Dusan Lajovic.

The ATP and WTA Tours have been suspended since March due to the pandemic and will not resume at least until the end of July.

Initially, the organisers in Belgrade, respecting the rules in force after the relaxation of the lockdown in Serbia, put 1,000 tickets on sale.

They sold out in just seven minutes.