ACL spots to be decided by last year standings if AGL is not completed: Taha - GulfToday

ACL spots to be decided by last year standings if AGL is not completed: Taha 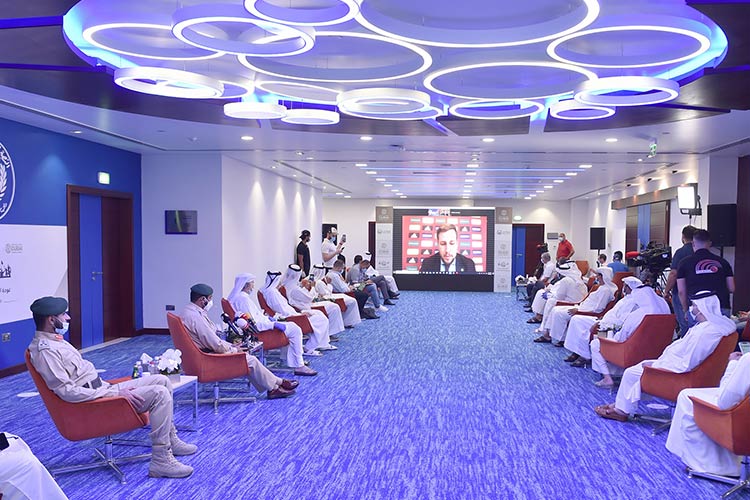 DSC and Dubai Police officials attend the forum with the other dignitaries on Wednesday.

Football fans in the UAE may have to wait a little longer to see their favourite clubs in action as the stalemate at the Arabian Gulf League (AGL) continues.

AGL was postponed until August in the mid of March due to coronavirus, which brought the whole world to a standstill.

All the sporting events across the globe were cancelled or postponed due to pandemic, which marched relentlessly over the human ambitions, trailing a blaze of destruction and death everywhere.

As the effect of virus seems to abate gradually, the sports across the world is making a swift and safe return. With the football league across the Europe returning to action one by one, UAE football fans may have to keep their fingers crossed for a little longer.

Taha Ezzat, Competition and Operation Director UAE Pro League, informed: “There is a coordination between the concerned authorities and the UAE FA about the resumption of the league. They will arrive at the right decision when they presume it to be the right time.”

Commenting on the decision about the AFC Asian Champions League (ACL) spots, Taha said: “Participation in the continental tourney will be according to the last year’s standings and as per the competition’s regulations and AFC entry manual if the league is not completed.”

Speaking about the promotion and relegation process in case the league is aborted, Taha added: “The decision will be taken by the UAE FA and the Board of Director of the UAE Pro League.”

He was speaking on the sidelines of a sports forum, which was attended by former Spain and Real Madrid star Michel Salgado and the head of European Tour Golf’s Middle East operations, who shared their insights alongside top officials of Dubai Sports Council (DSC) and Dubai Police as they discussed safety protocols for the ‘Return of Spectators to Sports Stadiums’ at Al Nasr Club on Wednesday.

Organised by Dubai Sports Council (DSC) in collaboration with Dubai Police under the slogan "Your Commitment Our Happiness”, the forum also saw Dr Andrew Murray, Chief Medical Officer at European Tour Golf, and Gergo Szabo, a spokesperson for the Hungarian Football Federation, share their thoughts and experience on the topic via a live video feed.

When the league was stopped in March, Shabab Al Ahli were at the top of the standings with 43 points from 19 matches with another seven rounds to spare with a lead of six points over second-placed Al Ain.

But the fight for the title looked set to go down to the wire with four teams separated by just two points.

Al Ain are on second with 37 points followed by Al Jazira, Al Wahda and Sharjah in the third, fourth and fifth spots respectively. Sharjah in fifth spot have 35 points from 19 games.

Earlier, opening the discussions, Saeed Hareb, Secretary General of DSC, clarified that the forum was not being organised to make any decisions or any announcements, but merely to share experiences and discuss protocols for the safe return of spectators to sports events, whenever authorities make a decision to allow that.

"At the very start, I would like to make it clear that we have not assembled here to make any decisions,” Saeed Hareb said in his opening remarks.

"We are here to discuss protocols for the safe return of fans to our sports events, whenever that happens. We are not saying it will happen in one month or two months, or whatever. So let us be very clear about this.

"This is a forum where we have brought together different stakeholders to discuss and share our experiences and thoughts.

Major General Abdullah Al Ghaithi, Director of the General Authority for Security of Bodies, Installations and Emergencies in Dubai Police, opened the forum alongside Hareb and he thanked DSC for all the community initiatives they have launched in partnership with Dubai Police.

Ghaithi said the situation regarding COVID-19 had improved greatly, thanks to the efforts made by all parties to restore normalcy in the Emirate of Dubai.

Meanwhile, Dubai is home to the European Tour’s season-ending finale, the DP World Tour Championships, which are scheduled to be held here at the Jumeirah Golf Estates from Dec.10-13. In past years, the tournament has attracted spectators in excess of 60,000 across four days, and fans could be queuing up at the turnstiles in similar numbers for this edition of the tournament as well.

Tom Phillips, Head of Middle East at European Tour Golf, remains optimistic but for now, the European Tour has decided to restart without fans as they play six tournaments in the United Kingdom starting July 22.

"As a global golf tour, The European Tour’s international reach is our greatest strength, but it has also been our greatest challenge as we look to return to competition,” said Phillips.

"We run professional golf tournaments in 30-plus countries across the world, so that means dialogue with 30 different governing bodies and authorities, each with their own guidelines and unique situation.

"Despite this challenge, last week we were excited to announce the resumption of our 2020 season, starting on July 22 with a swing of events across the UK. Multiple events in one region will allow us to adopt strict health and safety measures.

"We have also announced new dates for four of our Rolex Series events, including the season-ending DP World Tour Championship here in Dubai at Jumeirah Golf Estates from Dec.10-13, where once again the winner of the 2020 Race to Dubai will be crowned.”

Talking about the attendance of fans, Phillips added: "In terms of spectators, our first six events in the UK will be played behind closed doors.

"However, we are looking into the possibility of spectator attendance for events played later in 2020, but we are not committed to it at this stage. It completely depends on risk mitigation, Government approval of the country we are in and adhering to general and overarching global health guidelines. Golf is not a stadium sport, but there are considerations unique to our events.

"All tournaments will be subject to the Tour’s comprehensive Health Strategy, which will continue to evolve, aligned with international Government guidance and health guidelines.”