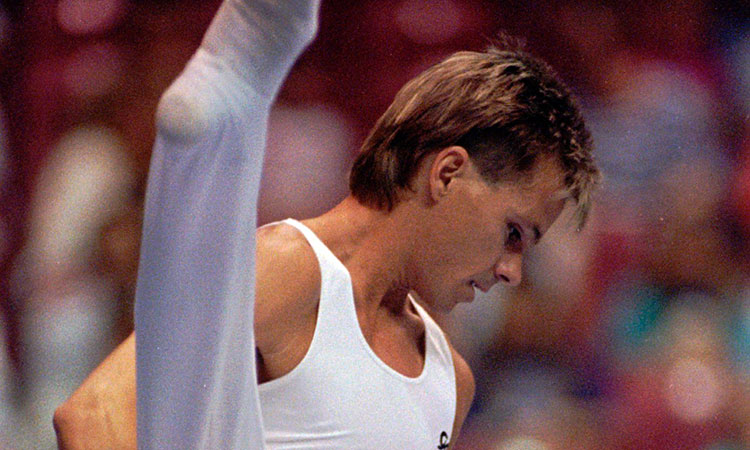 Kurt Thomas competes on the pommel horse at the US Gymnastics Championships in the compulsory round in Cincinnati. AP

Former Olympian Kurt Thomas, the first American to win the world championship gold in gymnastics, died on Friday from the complications of a stroke. He was 64.

Thomas suffered a stroke on May 24 which was caused by tear in the basilar artery of the brain stem, the family said. He died on Friday.

"I lost my universe, my best friend and my soulmate of 24 years," Beckie Thomas said. "Kurt lived his life to the extreme, and I will be forever honored to be his wife."

Thomas competed in the 1976 Montreal Olympics, but lost a chance to go for a medal in a second Olympics when the Americans boycotted the 1980 Moscow Games.

His gold in France came as a big surprise. The unexpected win led to a delay in the medal ceremony because organizers did not have a copy of the Star-Spangled Banner ready to go.

"I was singing the national anthem, and at the end of it I closed my eyes, and I dropped my head and I remembered that moment, and I can still remember that moment to this day," Thomas said in a 2003 interview.

He earned a total of six medals at the 1979 worlds, an American record for medals at a single worlds that Simone Biles equalled in two years ago.

He retired after the US boycott of the Moscow Olympics.