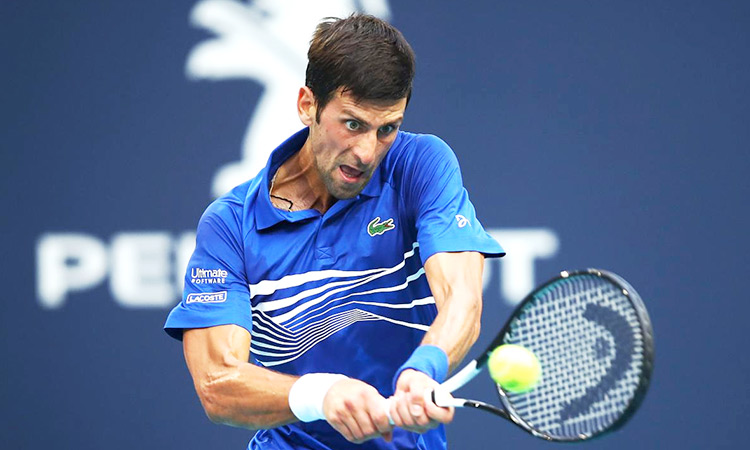 Novak Djokovic (in frame) has 17 Grand Slam titles with Rafael Nadal on 19 and Roger Federer with 20. Picture used for illustrative purposes.

The 33-year-old was on a 21-match unbeaten run before the season came to a halt in early March, winning the ATP Cup with Serbia, an eighth Australian Open title and a fifth Dubai Tennis Championships crown.

“I feel bad for Novak. He had the momentum,” Evert said on the French Open website.

“Everyone was saying, ‘Is he going to win a Grand Slam? Is he going to win four in a row? He was playing awesome tennis and then all of a sudden (season stopped). He’ll be an interesting story to see if he can get that momentum back.”

Djokovic, who recently returned to Serbia after being stranded in Marbella in Spain for two months due to lockdown, is organising an event that will be played across the Balkans and include Dominic Thiem, Grigor Dimitrov and Alexander Zverev.

He said last month that he could win the most Grand Slam titles and become the longest-reigning world number one by the time he retires. Djokovic has 17 Grand Slams with Rafa Nadal on 19 and Roger Federer with 20.

The possibility of tennis being wiped out for the rest of the year has led former players and pundits to speculate whether the shutdown would be more detrimental to younger players or the game’s dominant talents.

“I have a sneaky suspicion that the players that have been around for a long time, especially Serena (Williams), Roger, Rafa, I think they’re going to dive right into it,” said Evert.

Meanwhile, Federer, Nadal and Djokovic were among the tennis players who joined the #BlackOutTuesday campaign against racial injustice, as protests continue over the death of George Floyd, an unarmed black man who died in police custody.

Men’s world No. 1 Djokovic posted black screenshots on his Twitter and Instagram pages with the message “Black Lives Matter”, and was joined by Federer and Nadal, the other members of the “Big Three” of men’s tennis.

Grand Slam winners Maria Sharapova, Petra Kvitova and Stan Wawrinka were among other players who signalled their support for the campaign.

Osaka, whose father is Haitian and mother is Japanese, said people should be doing more than posting “the black square”.

“I’m torn between roasting people for only posting the black square this entire week ... or accepting that they could’ve posted nothing at all so I should deal with this bare minimum bread crumb they have given,” she posted on Twitter.

The US Tennis Association (USTA) posted a black screen shot as well as a statement against racism on its social media handles.

The USTA, organisers of the US Open Grand Slam, said it was “extremely disappointed, angry, and heartbroken” at the hardships faced by communities of colour in the United States.

“The African-American community is an integral part of our tennis family and the USTA stands unwaveringly against racism and injustice of any kind,” it added.