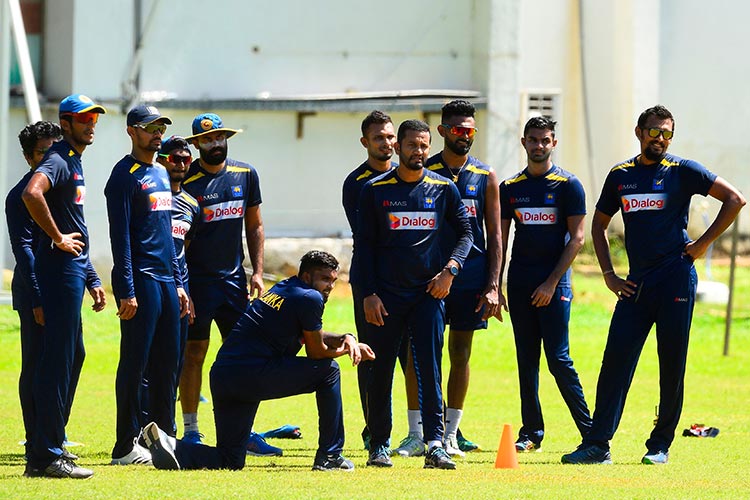 Sri Lanka's cricketers began training for the first time since their England series was abandoned midway in the ides of March due to pandemic outbreak. AFP

England will play three Tests at home against the West Indies in July, subject to government clearance, the England and Wales Cricket Board (ECB) announced on Tuesday.

The series had been due to take place in June but was delayed because of the coronavirus.

The West Indies, who agreed in principle to play last week, are due to arrive in England on June 9 and will be based at Old Trafford for a three-week period of quarantine and training before travelling down to Southampton.

England and Wales Cricket Board (ECB) director of events Steve Elworthy said: "Our main objective is to deliver a safe environment for all stakeholders including players, match officials, operational staff, essential venue staff, broadcasters and media.

"We are in daily dialogue with government and our medical team, who have been incredibly supportive during this period. These are our proposed dates and they remain subject to UK government approval."

The series should have started at the Oval in London on Thursday, with the second and third Tests originally scheduled for Edgbaston and Lord's.

The ECB decided to move the matches to the Ageas Bowl and Old Trafford for reasons of bio-security. Both grounds have on-site hotels where players and officials can be closely monitored for signs of COVID-19.

Edgbaston, in Birmingham, will remain a "contingency venue" and will be used to stage additional training throughout July.

Last week the ECB announced it was pushing back the start of its domestic season until August at the earliest.

But going ahead with international fixtures is seen as vital to avoiding a financial black hole, with ECB chief executive Tom Harrison warning a completely cancelled season could cost the board £380 million ($477 million).

Tuesday's announcement came as the ECB announced its financial results for 2019/20 at a virtual annual general meeting, reporting a record turnover of £228 million -- an increase of £56 million.

In March the ECB launched a £61 million aid package to help English cricket cope with the financial fallout from the pandemic.

Pakistan are due to arrive in England for a three-Test series later in the season, with England also scheduled to play limited-overs matches against Australia and Ireland.

The ECB said a decision on those matches and the women's internationals against India and South Africa would be made at a later date.

Ian Watmore's appointment as ECB chairman was ratified on Tuesday.

Meanwhile, Sri lanka's national team trained together for the first time in more than two-and-a-half months to sharpen their skills and fitness ahead of a potential restart of the international game, skipper Dimuth Karunaratne said.

Cricket in the country came to a halt on March 13 when the visiting England team pulled out on the second day of a four-day practice match ahead of their two-Test series.

"I think it is high time to train ourselves and get back to our fitness level and skill levels," the captain told reporters in the capital Colombo.

"We want to start international cricket. That's why we are starting practice."

A 13-member squad began a 12-day training session with indoor fitness drills on Monday. Ground training will start on Tuesday.

They will not be allowed to leave their hotel in Colombo or the practice venue for personal errands, the cricket board said.

Sri lanka has reported 1,633 coronavirus infections, including 11 deaths so far.

The Test series against England was put off indefinitely after the pandemic halted major sporting events worldwide.

Coach Mickey Arthur had customised home-training regimes for many players in the national team after the lockdown was imposed.