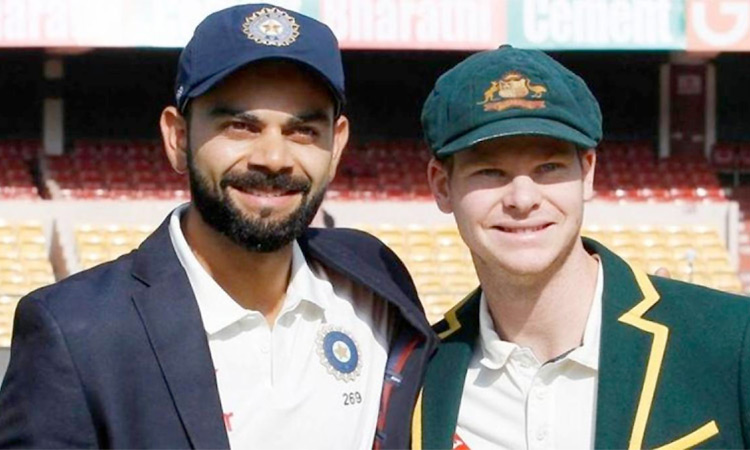 Prolific Australia batsman Steve Smith believes not being able to put saliva to shine the ball will be an added disadvantage for the bowlers once cricket resumes after the COVID-19 hiatus.

Smith on Monday said he likes to have an even contest between the bat and ball and not being able to apply saliva will change that equation.

All cricket has been suspended since March in the wake of coronavirus outbreak and ICC have put forward regulations that needs to be followed once the game returns to the field. One of the most talked-about regulations in the last few days has been ICC recommending to stop the usage of saliva to polish the match ball.

“It is going to be interesting as probably there are still some more changes coming in. If you can’t put saliva on the ball to shine it up, I think it is an added disadvantage for the bowlers in a way,” Smith said during a live interaction on Sony Ten Pit Stop show on their Facebook page.

“For me, even though I am a batter, I would want to see an even contest between bat and ball. I think that is really important for the game.

“We have to come up with another solution to keep that fair because you don’t want to see ball doing nothing... taking quality swing bowlers around the world out of the play.”

Due to the coronavirus crisis, the fate of T20 World Cup also hangs in balance, which is currently scheduled to be held in Australia later this year. There are talks going on with respect of Indian Premier League being held in the same window if T20 World Cup gets postponed. Smith is of the opinion that he would like to represent his country at the showpiece event but in case the tournament doesn’t take place, he won’t mind playing for Rajasthan Royals in the IPL either.

“I think when you’re playing for your country at a World Cup, that’s the pinnacle for one-day or T20 cricket, so of course I’d prefer to play in that,” Smith was quoted as saying by Sydney Morning Herald.

“But if that doesn’t happen and the IPL’s there, and they postpone it, then so be it. IPL’s also a terrific tournament as a domestic tournament.”

If this year’s T20 World Cup, currently slated to be held from October 18 to November 15, is postponed, which looks like the obvious solution in the wake of the coronavirus pandemic, it will open a window for the BCCI to host the 13th edition of the IPL which currently stands postponed. In fact, it is believed that the roadmap for the same is already in planning.

Meanwhile, Smith spoke about his admiration for India skipper Kohli and stated that his white-ball numbers are simply incredible. Speaking during a live video session on Facebook, Smith also spoke about the much-anticipated Border-Gavaskar Trophy, scheduled to be played Down Under later this year.

Smith and Kohli currently hold the top two positions respectively in ICC Test rankings and have been consistent across formats for a while now. Smith feels Kohli’s willingness to improve as a cricketer and his passion for the game has changed Indian cricket for the good.

“I admire Virat (Kohli) a lot, he is an amazing player. You look at his record now... simply incredible. He has done so much for India in cricket. You know the way they play the game now and the sheer passion he has got for Indian cricket,” Smith said during a live interaction on Sony Ten Pit Stop show on their Facebook page.

“His willingness to improve and get better. His body seems to have transformed over time and he looks so fit and powerful.”