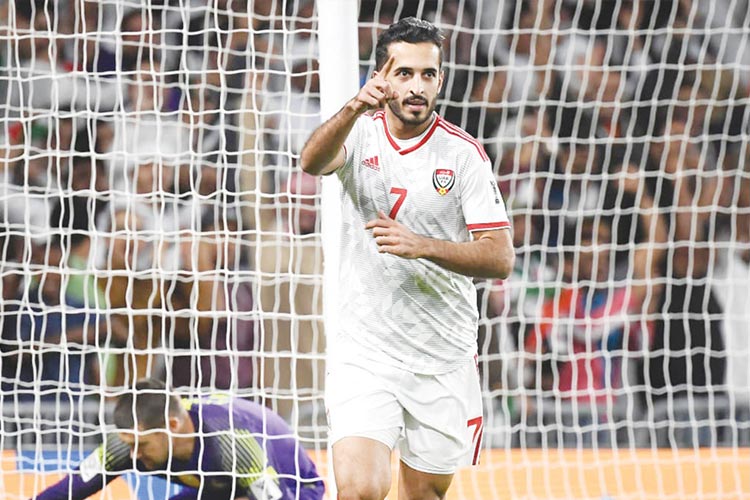 A one-club man whose rise to the nation’s footballing hall of fame was as rapid as his defence-evading runs, 29-year-old Mabkhout continues to break records left, right and centre, with the domestic league’s all-time top scorer record not far from sight.

A collective cheer could be heard everywhere around Abu Dhabi as the final whistle sounded at Singapore’s Jurong Stadium.

On Oct.28, 1989, Adnan Al Talyani rose highest to head in the equaliser against Korea Republic to take the Whites to their first ever FIFA World Cup. ‘The Prince’ remains widely acknowledged as the UAE’s best footballer of all time.

Twelve months later Ali was born and little did anyone know that the newborn would grow to become ‘Little Al Talyani’.

Years later, hundreds of camera flashes went off as the two number 7s made their way side by side onto the pitch at Zayed Sport City.

For the recently crowned Ballon d’Or winner, Cristiano Ronaldo, this was the start of the road towards adding one more medal to his ever-growing cabinet. But it was the home side’s number 7 who was reaching the zenith of his own successful, albeit very different, footballing career.

Mabkhout had scored the only goal of the match against AFC Champions League winners Urawa Red Diamonds to put his boyhood club Al Jazira face-to-face with European giants Real Madrid in the semi-finals of the 2017 FIFA Club World Cup.

It was a fairytale moment for the forward as Al Jazira led the European champions for an hour before eventually falling to late goals from Ronaldo and Gareth Bale.

Mabkhout was a constant menace for the Real Madrid defenders and, despite not scoring on the night, he earned special praise from the Spanish giants manager Zinedine Zidane after the game.

“They have two quality players, Mabkhout and Romarinho, who gave our defence a tough test,” said the former World Cup winner.

“Al Jazira is where I feel most comfortable, it is my home and I am not thinking about leaving,” says Mabkhout, who came through the youth ranks at Mohamed Bin Zayed Stadium and has been playing for the first team since 2008.

“I received the ball and immediately hit it into the bottom left corner. I don’t remember which season it was, but I do remember it was against Al Dhafra,” adds Mabkhout, trying to recall his first goal in Al Jazira colours.

“I don’t have a great memory. I started documenting my goals, but then I got busy and stopped.”

Twelve years on from his first goal, Mabkhout 31 goals, was looking to surpass Ghana’s Asamoah Gyan’s all-time record of the most number of goals in a single season.

Within 21 minutes, he had achieved his objective, before adding a confirmation goal in the second half to end the season on 33 goals as Al Jazira romped to the league title.

2015 was the year the rest of Asia learned about the Emirati forward when the Whites travelled to Australia for the AFC Asian Cup. Mabkhout netted a second-half brace in a 4-1 win over Qatar in their opening game, before he scored after just 14 seconds in the 2-1 victory over Bahrain in what remains the fastest goal in AFC Asian Cup history.

Then, seven minutes into the quarter-final match with defending champions Japan, Mabkhout received Amer Abdulrahman’s long pass and fired on the half-volley from a tight angle with a strike he fondly remembers.

“My goal against Japan remains the most valuable for me. It is my favourite moment with the national team,” notes Mabkhout.

Four years later, the AFC Asian Cup had arrived at Mabkhout’s own home in the UAE, and the striker was determined to replicate his exploits from four years before.