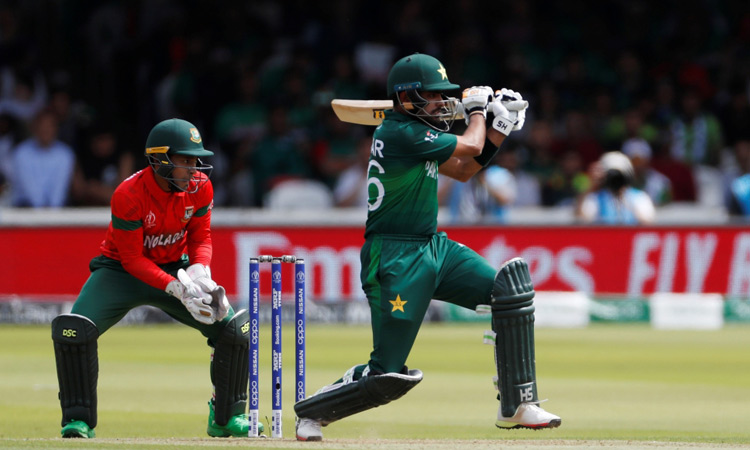 Babar Azam plays a shot during a match. File

Australia are due to host the seventh Twenty20 World Cup in October and November but organisers face challenges of providing appropriate bio-security and quarantine measures for 15 international teams.

Lingering travel restrictions could also hit the event, where forty-five matches are scheduled to be played in seven cities.

“It will be my first World Cup as skipper so I am praying for it and keeping fingers crossed,” Azam said in a virtual press conference.

The International Cricket Council will discuss the event at its board meeting in Dubai next week.

Azam said he would not mind if cricket was played in closed stadiums, without fans.

Pakistan were forced to play before sparse or no crowds in the UAE, their neutral ground, in the aftermath of the 2009 terrorist attack against a visiting Sri Lanka team in Lahore.

International cricket returned gradually to Pakistan from 2015 but it was only last year that the side managed to stage a Test at home after a gap of ten years.

“We are now fourth in Twenty20, sixth in ODIs and seventh in Tests which is not acceptable and I want to see improvements in that,” Azam said.

Pakistan topped the Twenty20 rankings from January 2018 to until last week.

Meanwhile, Azam on Monday said he should not be compared with India skipper Virat Kohli as they are both different type of batsmen.

Azam, who was recently appointed Pakistan ODI captain, is ranked third in 50-over cricket whereas Kohli is number one. In T20Is, Azam is ranked number one followed by India’s KL Rahul. Kohli finds himself in 10th position as per latest ICC rankings. In Tests, Azam is ranked fifth with Kohli placed second below Australia’s Steve Smith.

There have been a lot of comparisons between Azam and Kohli, but the 25-year old on Monday said it is not right to compare the two.

“I think there should not be any comparison. He is a different type of player and I play differently. My job is to win games for my team and I will focus on that, not comparisons,” Azam told local media via video conferencing which was shared by Pakistan Cricket Board (PCB).

Asked about his way of captaincy, the soft-spoken Azam said he would like to have control of his emotions on the field while leading the side and try to get the best out of his teammates.

Azam refused to comment on Shahid Afridi’s remarks on Kashmir.