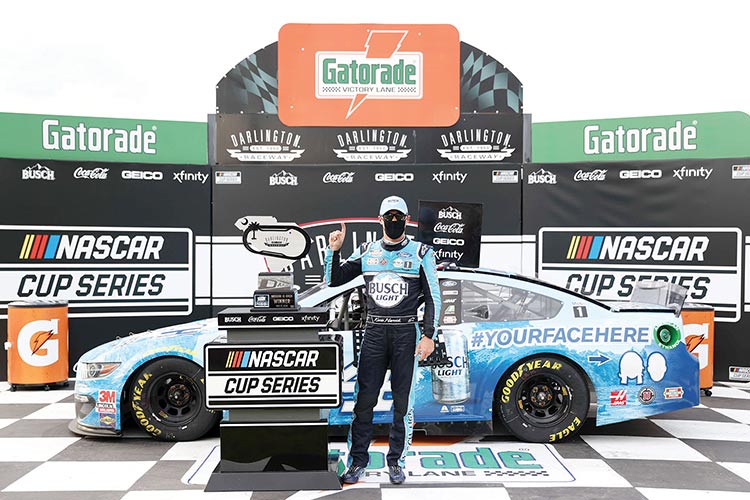 Kevin Harvick shook off the rust of a two-month break in the NASCAR schedule by winning the closed-door Real Heroes 400 on Sunday at the Darlington Raceway in South Carolina.

Californian Harvick seized the lead at the midway point and led for more than 150 laps to claim NASCAR’s first live competition since March 8, when the series was shut down due to the coronavirus pandemic.

Harvick earned his 50th career victory in a race contested without fans and with a number of new health safety precautions.

While the day unfolded with none of the bells and whistles that have made NASCAR North America’s most popular motor sport, on the track the race delivered as promised with plenty of bumper-to-bumper action.

Harvick, winner of the 2007 Daytona 500, produced a masterful drive to pull away after a late restart to cross 2.15 seconds clear of Alex Bowman and Kurt Busch.

The 44-year-old driver celebrated his victory in what has become typical NASCAR fashion with some tire burning donuts that would normally spark a massive roar of approval from the stands but in this race there was no one to witness the show.

Not even the growl from 40 V8 stock car engines could make up for the silence as drivers exited the track to muffled applause from pit crews and officials.

“I didn’t think it was going to be that much different and then we won the race and it is dead silent out here, so we miss the fans,” said a bewildered Harvick, standing alone on the track. “It is weird just because there is nobody up there.

“Usually you get out of the car and the crowd is screaming and yelling ... today it was like, well, I don’t know really what to do here.

“We got done, everybody left.”

For US sports fans the Real Heroes 400 was the highlight of a weekend that saw sport slowly come back to life after most events were shuttered mid-March by the COVID-19 pandemic that has claimed over 88,000 American lives.

US President Donald Trump said in an interview with NBC Sports during the skins broadcast that sport was a part of “the psyche of our country”.

As the NBA, NHL and MLB work through scenarios that could get them playing again, NASCAR is ready to go -- Sunday’s race the first of 20 taking place across seven Southern states over 36 days.

NASCAR will be back at Darlington Raceway on Wednesday for the second Cup race in four days.

While the action on the track was familiar, everything else was uncharted.

Teams, each allowed 16 members, arrived in the morning at designated times and temperatures were screened before entering the infield. Only 900 essential personnel were approved to be inside the gates.

With limited crew members drivers were left to do some of the more mundane chores, such as filling water bottles and making lunch, that might have otherwise fallen to staff.

When called to the track, drivers, crews and officials wore face masks.

With no practice or qualifying places on the starting grid were set by a random draw with Brad Keselowski on pole.

NASCAR’s oldest speedway on the Cup circuit is known as the “Track Too Tough to Tame” and proved to be just that for Ricky Stenhouse Jr., who had his return come to an abrupt end as he slammed into the wall on the opening lap.

Otherwise racing was free of major wrecks as drivers quickly settled into their routines.

“I have been around this deal for a long time and this is not like anything I have experienced,” said Harvick. 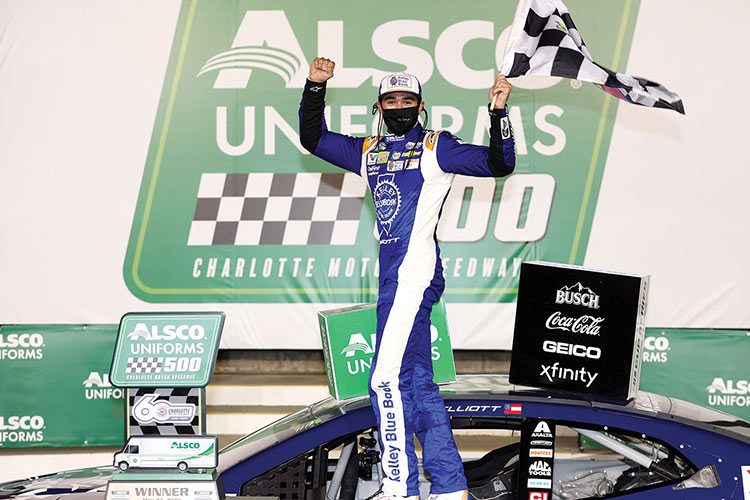 Elliott won on Thursday night in the rain-delayed event at Charlotte Motor Speedway to close a brutal 12 days for NASCAR. The event, postponed on Wednesday night, was the fourth Cup race since the series resumed racing May 17.