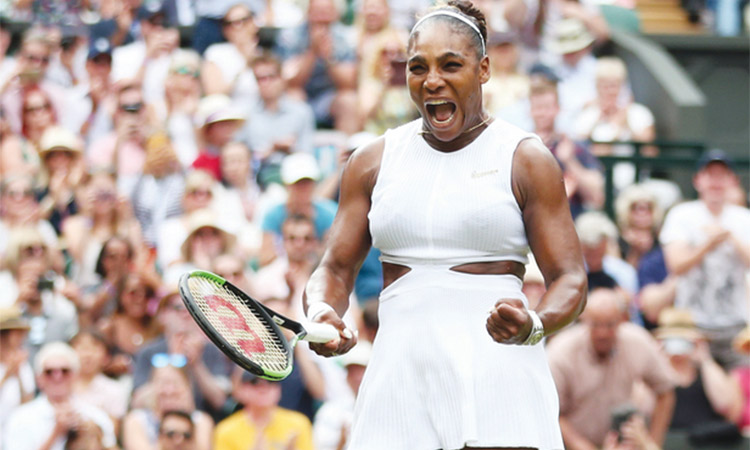 “I really look forward to getting back on the court,” the 23-time Grand Slam champion said in a chat with elder sister Venus during an Instagram live workout on Tuesday.

“It’s what I do best. I absolutely love playing.”

Tennis is on hiatus until at least mid-July thanks to the COVID-19 pandemic, with the French Open postponed until autumn and Wimbledon cancelled for the first time since World War II.

Serena said she’d come to see the break as “a necessary evil.

“I felt like my body needed it, even though I didn’t want it,” said the 38-year-old, who last won a Grand Slam title at the 2017 Australian Open. “And now I’m feeling better than ever. I’m feeling more relaxed, more fit. Now I can go out and play real tennis.”

Elder sister Venus, a seven-time Grand Slam winner, began posting workouts on Instagram eight weeks ago and this week she invited Serena, “the greatest tennis player to ever exist -- my little sister” to share a yoga-inspired stretching session.

Serena said the exercises, which took about half an hour, served as a warm-up for her, even though they were “a little intense.”

“Do not injure yourself doing this,” she admonished during one lunge, while advising at another point: “If you have bad knees, like me, use a pad.”

Meanwhile, two-times Grand Slam champion Naomi Osaka is using the novel coronavirus shutdown as one of self reflection to try and overcome her crippling shyness.

The tennis season was suspended in early March due to the COVID-19 outbreak, and the hiatus will continue until at least mid-July with many countries in lockdown to contain the virus.

Japan’s Osaka, who trains in the United States, the country worst affected by the flu-like virus with over 1.4 million infections and more than 83,000 deaths, is taking advantage of the extended break to do some soul searching.

“I think people know me as being really shy… I want to take the quarantine time to just think about everything, and for me, I have a lot of regrets before I go to sleep,” Osaka told CNN Sport.

Petra Kvitova said last year Osaka would have to get used to having a target on her back after the Japanese said she struggled to deal with increased scrutiny in the wake of her rise to the top of the world rankings.