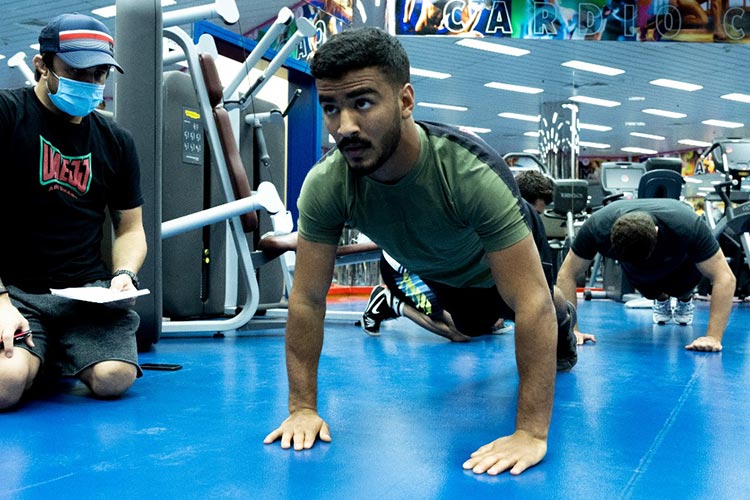 UAE national jiu-jitsu players aim to be in peak condition for a packed international calendar post-summer.

The UAE national Jiu-Jitsu team have returned to active training in readiness for the resumption of international competition with a closed training camp at the Armed Forces Officers Club and Hotel in Abu Dhabi.

The UAE Jiu-Jitsu Federation (UAEJJF), the governing body for jiu-jitsu in the Emirates, is ensuring that participating players, coaches and training camp support staff are subject to stringent medical exams in line with local and international guidelines on containing the spread of the COVID-19.

The camp was approved by UAE authorities after the UAEJJF board of directors devised a robust health screening plan for all participants at a recent board meeting. With strict public health and safety measures in place, the camp consists of two daily training sessions – a light training session before Iftar and a two-hour session from 10:00pm to midnight.

Training involves minimal contact, while social distancing measures are in place in and around the camp.

All UAE national team players were put through intense physical fitness and body fat composition tests after arriving at the camp, with the UAEJJF set to compare.

Mubarak Saleh Al Menhali, Director of the UAEJJF’s Technical Department, praised the dedication of the training players and said they would be ready to compete at the highest level of international championships once the sport resumes globally. “The UAE national team has a challenging path ahead and it’s our responsibility to help them maintain and enhance successes at previous championships.”

“All being well, they are facing a packed calendar, including China’s Beach Games, the JJIF World Championship and the Abu Dhabi World Professional Jiu-Jitsu Championship.

“We must prepare now to ensure our players are well-placed to capture the golds and raise the UAE flag high in the coming months.” added Menhali.

Earlier, Limos said that the sport of jiu-jitsu in the UAE is receiving significant support, leading to many leading global successes.

He also expressed his appreciation for the UAE’s efforts to advance the sport, stating: “The entire Jiu-Jitsu community is grateful to His Highness Sheikh Mohamed Bin Zayed Al Nahyan, Crown Prince of Abu Dhabi and Deputy Supreme Commander of the UAE Armed Forces, for supporting the development of the sport.”

Limos also lauded the support of Abdulmonem Al Sayed Mohammed Al Hashimi, President of the UAE Jiu-Jitsu Federation, and highlighted the UAE’s efforts to strengthen the stature of the sport, which he considers an important experience for him as a coach.

He then pointed out that physical conditioning and training are the key factors that ensure a competitor’s success, noting that he is currently working with the federation’s technical team to improve the performance of Emirati competitors and enhance their fitness.

The UAE National Team won 52 medals in the World Professional Jiu-Jitsu Championship held in Abu Dhabi in 2019, after winning nine medals in the Asian Games in 2018, under the supervision of Limos.

All participants underwent medical tests to verify that they were not infected with any diseases, as well as followed social distancing rules. They were then checked-in at their rooms to quarantined until their test results were released.