Brown’s masked men bring tennis back to sound of silence 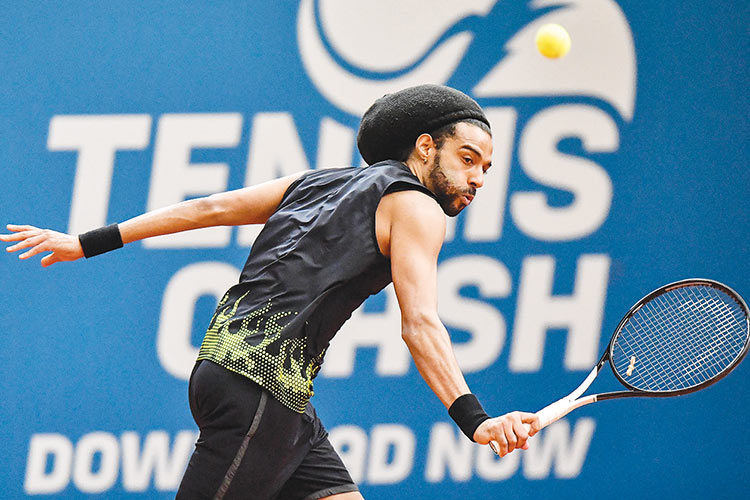 Dustin Brown, the man who once famously shocked Rafael Nadal at Wimbledon, donned a protective mask and took centre stage again on Friday, but in an event far removed from the gentrified surroundings of the All England Club as tennis quietly emerged from the shadow of the coronavirus.

An eight-man exhibition competition at the Base Tennis Academy in the tiny town of Hoehr-Grenzhausen, near Koblenz, was the first tournament to be played since coronavirus brought tennis to a halt in mid-March.

Strict rules over health and safety meant there were no fans, no ball boys or girls and no line judges. There was just a chair umpire.

Meanwhile, handshakes were banned, players handled their own towels and brought their own water and fruit to the clay courts.

“A couple of weeks ago there were no plans to get on the court anytime soon,” 35-year-old Brown told The Tennis Channel which live-streamed the opening day’s action. It was a tough time because it’s tough to get motivated when there’s no date for returning to play.”

Brown was the best-known name in the field, none of whom are ranked in world’s top 100, thanks to his 2015 win over Nadal at Wimbledon.

He was the envy of fellow professionals on Friday.

“Watching the highlights from the exhibition matches and guys like @DreddyTennis in full form, while I am sitting here questioning if I would beat my grandmother in 2 tiebreaks or 3,” tweeted American player Noah Rubin from his home in New York.

Brown’s German compatriot Yannick Hanfmann was the highest ranked player at 143 in action.

“It was cool, actually,” Hanfmann told AFP subsidiary SID after winning his two opening matches. A little strange, yes. But nice to be back, finally. It was like a training match with a buddy.”

After Hanfmann defeated Johannes Harteis, he bowed to his opponent at the net instead of shaking hands.

“We are socially distancing and there is disinfectant everywhere,” added the 28-year-old.

“In the morning even the police were here and checked everything again.” Prize money for the tournament, which also takes place over the next two weekends, amounts to just a few hundred euros.

Hanfmann, who will have free board and lodgings at the academy for the duration, says he is just about managing to make ends meet during tennis’ suspension. He has earned $543,000 in prize money in his career.

“I have built up a few savings and I am not one to throw money away,” he said. “But things are getting tight now.”

Friday’s event is just one of a number of exhibition tournaments to be played behind closed doors in coming weeks.

They will fill the competitive void caused by the suspension of the tennis schedule - the ATP and WTA are not resuming until July 13 at the earliest.

Rafael Nadal’s Academy in Mallorca is in talks with the ATP over plans for “elite players to reside, train and compete between themselves in matches that will be televised so that fans around the world can enjoy them.” P

atrick Mouratoglou, the coach of Serena Williams, plans 10 closed-door matches to be broadcast live at his academy in Nice on each of five weekends under the title “Ultimate Tennis Showdown”.

The competition is set to start on the weekend of May 16 with a match between world number 10 David Goffin of Belgium and 20-year-old Australian Alexei Popyrin.