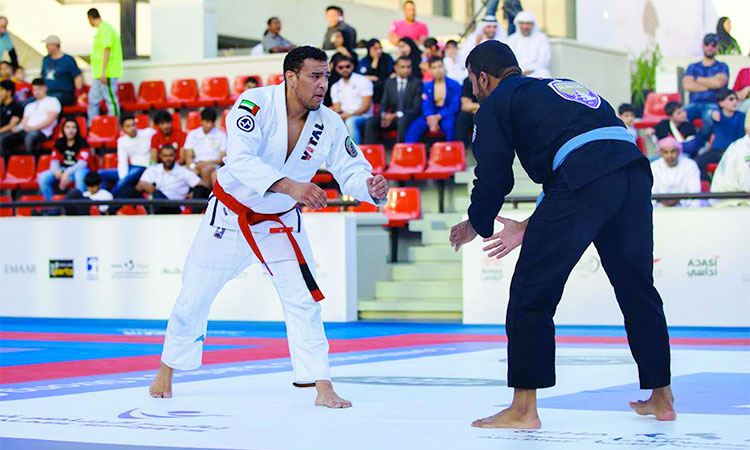 As the coronavirus pandemic brought a halt to most major sports around the world, the UAE Jiu-Jitsu Federation (UAEJJF) is planning to host the postponed 12th edition of the Abu Dhabi World Jiu-Jitsu Professional Championship in November.

World Jiu-Jitsu Professional Championship is the highlight of the UAE Jiu-Jitsu Federation’s calendar and normally takes place in April.

The 12th Abu Dhabi World Jiu-Jitsu Professional Championship was scheduled for April 11-17 at the Mubadala Arena in Zayed Sports City. The championship was supposed to bring curtains down on the 2019-2020 season, and an awards ceremony also slated to be held on its sidelines to crown the world champions the day after.

The organisers had to postpone the event following the outbreak of the virus.

Abdulmonem Al Sayed Mohammed Al Hashimi, President of the UAE and Asian Jiu-Jitsu Federations, said it was the first time in 12 years they had to postpone the World Jiu-Jitsu Professional Championship.

“We didn’t take that decision easily,” he said. “This is an unprecedented global crisis and we offer the jiu-jitsu community words of hope and optimism.”

Hashimi stressed his team has been working continuously to come up with solutions during the difficult time.

“We are pleased to announce that our team is already working with a new timeline for the 2020 World Pro and all other jiu-jitsu activities to resume,” he added.

“November is the most tentative target to stage the World Pro. We are already working with the local authorities also to make it possible to schedule local, regional, national and international events as soon as possible.”

Hashimi also stressed that the support of His Highness Sheikh Mohamed Bin Zayed Al Nahyan, Crown Prince of Abu Dhabi and Deputy Supreme Commander of the UAE Armed Forces, for the UAE’s sports sector is due to his belief in the abilities of Emirati citizens to excel and achieve advanced positions in various regional and international sporting events.

“The vision of the UAE’s leadership is our source of inspiration at the UAE Jiu-Jitsu Federation, and it encourages us to prepare a distinguished generation of qualified and remarkable talents in various sports,” Hashimi said.

“The UAE has an international jiu-jitsu project, whose foundations were established by Sheikh Mohamed. Due to him, the sport has continued to achieve successes, leading to the participation of more people, especially in the Abu Dhabi World Jiu-Jitsu Professional Championship and other championships organised by the federation throughout the year,” he added.

The World Jiu-Jitsu Professional Championship carries a prize purse of over Dhs2.5million which is considered as the richest championship in the world and draws more than 5,000 fighters from more than 100 countries.

Mohammed Salem Al Dhaheri, Vice President of the UAE Jiu-Jitsu Federation, expressed the federation’s appreciation for the generous patronage of Sheikh Mohamed for the event, as well as his keenness to support jiu-jitsu and strengthen the country’s stature in the sport.

The federation is continuing its efforts to reinforce the country’s position on the world’s sporting map,” he added, while highlighting the championship’s world class organisation and the federation’s future vision, supported by the country’s leadership, to ensure the country’s bright future.

“This vision of our wise leadership is enabling the Federation to build a generation of distinguished sporting talent that can perform on the global stage,” he added.

In the UAE alone, there are more than 140,000 Emirati practitioners of the martial art, including over 80,000 schoolchildren.