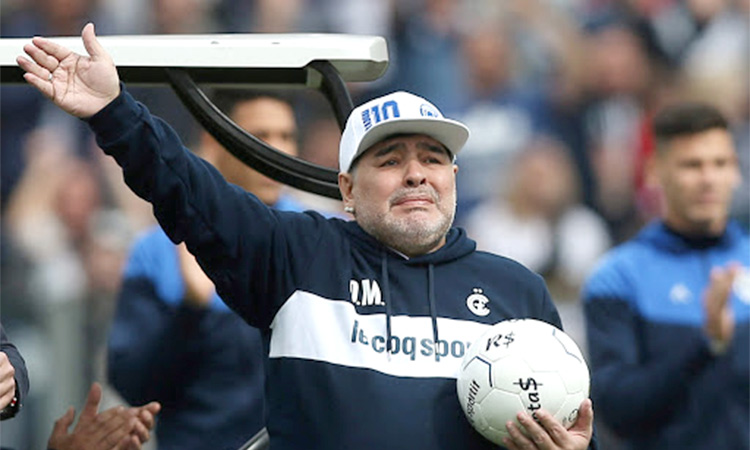 Diego Maradona took charge of Gimnasia last September when the club were mired at the foot of the Argentinian Superliga standings with just one draw and four losses. File / Reuters

Diego Maradona said he is eager to return to work as the head coach of Gimnasia y Esgrima La Plata and hailed his ‘beautiful’ relationship with the club’s fans.

Argentinian football has been suspended since March 16 amid the global COVID-19 pandemic and officials have yet to indicate when local competitions might resume.

“It is a strange situation that we are in here and all over the world,” Maradona said in an interview with newspaper El Dia de La Plata. “I’m looking forward to returning to Estancia Chica (Gimnasia’s training ground) to work with my boys again. It will be like when you see your girlfriend after a vacation,” the 1986 FIFA World Cup winner added, according to Xinhua news.

Maradona compared Gimnasia’s supporters to those of Napoli, whom he famously represented as a player from 1984 to 1991.

“I have a beautiful relationship with the (Gimnasia) fans. They remind me of Napoli’s supporters because of their passion and loyalty,” added Maradona, who led the club from southern Italy to two Serie A titles, a Coppa Italia and a UEFA Cup, and who is still idolized by their fans.

Maradona took charge of Gimnasia last September when they were mired at the foot of the Argentinian Superliga standings with just one draw and four losses. However, the club improved markedly under Maradona, jumping five places in the 24-team Superliga standings to finish the season with six wins, six draws and 12 losses.

Despite their recovery, Gimnasia remain in danger of dropping to Argentina’s second tier under the country’s complex promotion-relegation system, which considers results over a three-year cycle. The fate of Maradona’s men rests with their performances in the Superliga Cup, which was halted after just one week.

Maradona said he is in regular contact with his players and declined to comment on reports that the AFA might suspend its promotion-relegation system this year.

“With the work we were doing, I had no doubt that we were going to get out of the relegation zone,” the 59-year said. “We still have to wait and see what measures the AFA will take. We will work hard to make sure that we’re prepared for any possible scenario.”

Meanwhile, Edgardo Codesal, the referee in the 1990 FIFA World Cup final between West Germany and Argentina, made striking revelations that he was thinking of sending off legendary footballer Diego Maradona even before the kick-off.