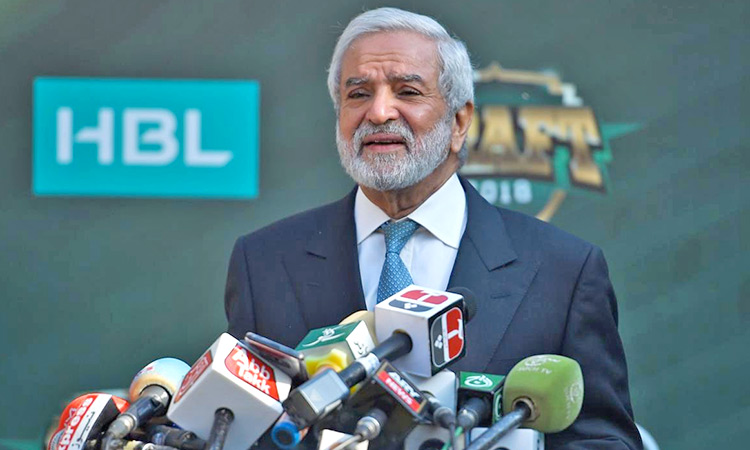 According to PCB chairman Ehsan Mani, the board is going to bid for five to six ICC events in the 2023 to 2031 cycle and are hoping to win at least one or two of those. File / Agence France-Presse

The Pakistan Cricket Board, along with Emirates Cricket Board (ECB) of the UAE, is planning to launch a joint bid to host ICC events scheduled to be held in the upcoming future.

According to PCB chairman Ehsan Mani, the board is going to bid for five to six ICC events in the 2023 to 2031 cycle and are hoping to win at least one or two of those.

“We had expressed an interest to host five to six events and, frankly, it is likely we won’t be getting more than one or two. But we also thought out of the box to bid jointly with another country,” Mani said in a PCB podcast released on the official website of the cricket body.

“I have already begun speaking with the Emirates Cricket Board for a team-up to increase the chances of hosting some of it together but, again, it needs cooperation.

“There are a few events with 16 games and then there are events with 30-40 games, so depending on the scale, the workload can be divided between us,” he added.

According to a report in ESPNcricinfo, the International Cricket Council had invited expressions of interest from its member nations until March 15 for 20 global events that will be held in the 2023-2031 cycle.

However, the meetings have been deferred indefinitely due to the coronavirus pandemic which has brought the entire cricket calendar to a grinding halt.

During the podcast, the PCB chief insisted that for the development of Pakistan cricket, it is important that ICC tournaments are held in the country.

“We intend to make a very serious expression of our interest on this matter and we will be getting full government support as well,” Mani stressed.

So far, Pakistan has hosted two World Cups -- 1987 and 1996. They were also scheduled to jointly host 2011 World Cup along with India, Bangladesh and Sri Lanka but lost the hosting rights as several nations refused to tour Pakistan over security concerns.

Meanwhile, Mani also said that any disruption to the Twenty20 World Cup in Australia later this year would have serious financial implications for most of the cricketing nations.

“The World T20 in Australia, if that gets disrupted then the financial fallout from that will be very big,” Mani said.

“The distributions they (the International Cricket Council) give to members, many boards, including us, will feel the pinch of it.”

The ICC, which distributes profit from its tournaments among member countries, is working on contingency plans but expects the World Cup to go on as scheduled.

Mani, who chairs ICC’s Finance and Commercial Affairs committee, said PCB was preparing for the worst.