A year after glory, COVID-19 could derail Tiger’s bid for a record 18 major wins - GulfToday

A year after glory, COVID-19 could derail Tiger’s bid for a record 18 major wins 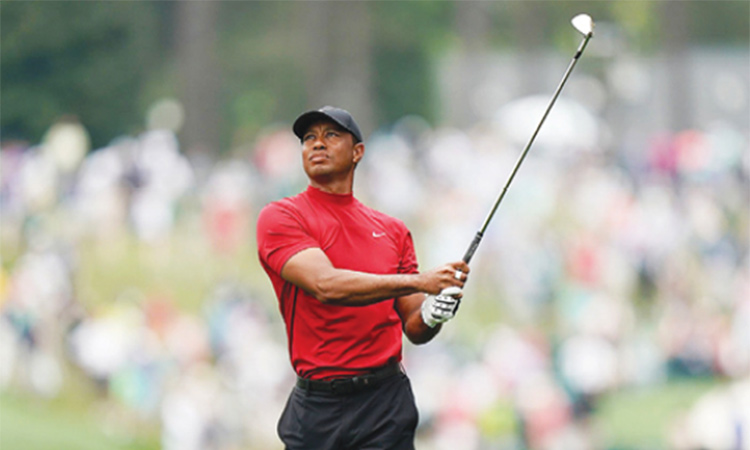 Tiger Woods will have plenty of rest time for his surgically repaired back before a November Masters. File / Associated Press

One year after Tiger Woods reignited his chase for golf’s record 18 major wins with an amazing Masters victory, the coronavirus pandemic has become the latest obstacle to his historic chase.

Woods would have been defending his 15th career major title and seeking a record-tying sixth green jacket this week at Augusta National had the deadly virus outbreak not halted sports worldwide.

“Somehow it all came together for one magical week,” Woods said in February. “Just an amazing week.”

But this year’s 84th Masters was postponed to November 12-15, the British Open was canceled, the US Open was delayed from June to September and the PGA Championship was moved from May to August.

“There are a lot more important things in life than a Golf tournament right now,” Woods tweeted last month. “We need to be safe, smart and do what is best for ourselves, our loved ones and our community.”

“He’s got me shaking in my boots,” Nicklaus said last April. Woods, 44, will have plenty of rest time for his surgically repaired back before a November Masters and even a bit more rest from the PGA Championship to the US Open if both are played as now scheduled.

“I have to listen to my body and properly rest when needed,” Woods tweeted in March.

But Father Time is a growing factor. Only eight men have won a major beyond their 44th birthday, none more than once. Nicklaus is the most recent with his 1986 Masters triumph at 46 while the late Julius Boros was the oldest major winner at 48 at the 1968 PGA.

“One of the hardest things to accept as an older athlete is that you’re not going to be as consistent as you were at 23,” Woods said in July.

Meanwhile, a host of rivals are in their prime, including Rory McIlroy, who can complete a career Grand Slam at an autumn Masters.

“I think this scheduling will be to Rory’s favor,” Nicklaus told Golf Channel. “He seems to play better in the fall. He has won the Tour Championship a couple times, played in (nearby) Atlanta, very similar conditions.”

Woods is 11th in the world Golf rankings, and just seventh among Americans. Only the top four will qualify for the US 2021 Tokyo Olympics squad.

“Olympic gold medal would be a hell of a feat,” Woods has said. “First I need to qualify. It would be exciting if I got a chance to represent the United States in the Olympic Games.”