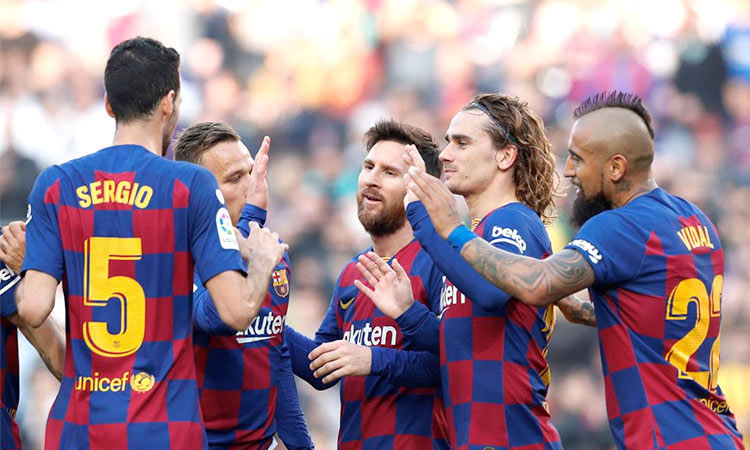 Already players at Barcelona have agreed a 70 per cent pay cut and clubs across Europe are taking similar measures. File / Reuters

“We are living through something none of us were used to and which will change us profoundly,” Everton manager Carlo Ancelotti told Corriere dello Sport.

Not since World War II has the sport been forced to stop across Europe. The sudden interruption has exposed the deficiencies of a system intoxicated by huge sums of money.

Cutbacks are inevitable in the short term.

“TV money will go down, players and coaches will earn less. Tickets will cost less because people will have less money. The economy will be different and so will football. Maybe it will be better,” said Ancelotti.

“As with most things, crisis is an opportunity,” football historian and academic David Goldblatt, author of recent book The Age of Football, told said, before sounding a warning.

“It could actually get worse. For there to be real change there has to be a change in the way power and ownership is distributed in the game.”

At the moment the financial power belongs to the lucky few at the top, but even they are being hurt. That is likely to affect the transfer market, and huge spending sprees on players could become a thing of the past.

“In two or three years, it will not be possible to spend the sums we have been seeing because every country will be affected. In all likelihood a new footballing world will emerge from this,” insisted former Bayern Munich president Uli Hoeness.

Already players at Barcelona -- the richest club in the world -- have agreed a 70 per cent pay cut. Clubs across Europe are taking similar measures.

It is evidence that clubs, even in the elite, have been living on the edge, and it raises the question of whether salary caps could finally be seen as a way forward, despite the difficulties presented by EU rules.

In Germany, the Bundesliga’s four Champions League representatives this season have pledged 20 million euros ($22 million) to help crisis-hit clubs in an encouraging sign of solidarity.

Meanwhile, lessons may also be learned about how TV revenue is distributed in future.

It may also be time to rework the fixture calendar. The fashion for expanding existing tournaments -- like staging a 48-team World Cup and 24-team Club World Cup -- is surely not sustainable.

“It is now high time that we find some rules to say ok, let’s get out of this crisis as well as we can, but let’s also put safeguards in that manage player loads successfully moving forward,” warned Jonas Baer-Hoffmann, general secretary of global players’ union FIFPro, as he called for “a much healthier set-up than we what have had lately.”

Goldblatt, meanwhile, believes FIFA need to look again at plans to stage a 48-team World Cup in 2026 all across North America.

That, and the European Championship that UEFA intend to stage in 12 cities across the continent, are being planned in ways which appear at odds with the need to face up to another imminent threat: climate change.

“If we have learned anything from the last couple of months it is that we should listen to the scientists,” Goldblatt says. “We need to hit the pause button on all of this and have a massive rethink.”