Jiu-jitsu is receiving significant support in the UAE: Limos - GulfToday

Jiu-jitsu is receiving significant support in the UAE: Lemos 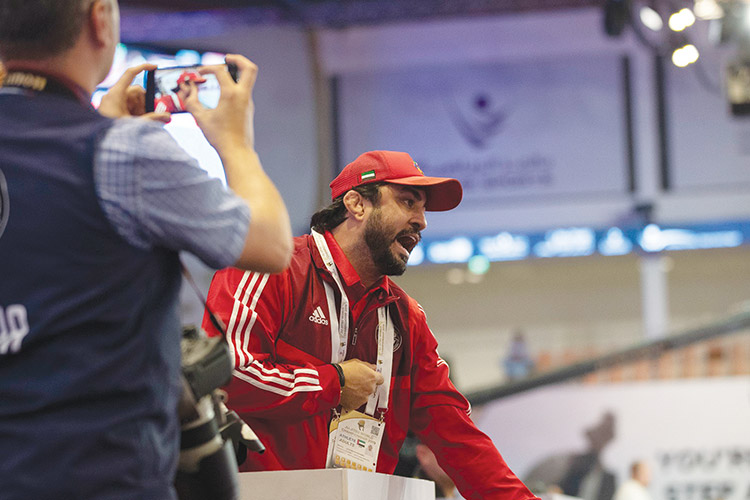 A customary sight at every Jiu-Jitsu tournament featuring the UAE National Jiu-Jitsu Team is that of a man with a red hat hunched over his chair in the coach’s corner, bellowing instructions and encouraging fighters. He is the first to congratulate athletes regardless of the result on the mat.

That man is Ramon Lemos, coach of the UAE National Team since 2015 and the epitome of everything the UAE Jiu-Jitsu Federation (UAEJJF) values – dedication, determination, drive, passion, loyalty, unity and respect.

Lemos, 40, was born in Niteroi, a city in Brazil just across the bay from the sprawling metropolis of Rio de Janeiro. He is renowned as one of the most reputed coaches in the world of jiu-jitsu, having tutored some of the best athletes in his native Brazil.

Recognising his qualities, he was appointed by the UAEJJF as coach of the national under-18 Jiu-Jitsu team five years ago, before stepping up as coach of the senior squad the following year.

With the steadfast support of the UAEJJF, Lemos has overseen an impressive uptick in consistent performances from the country’s athletes, which has brought some impressive results.

The UAE National Team bagged 52 medals at the 2019 Ju-Jitsu World Championship in Abu Dhabi, following on from the nine medals the team collected at the 2018 Asian Games.

Lemos learnt the tricks of the jiu-jitsu trade from his father, a renowned jiu-jitsu exponent and coach in his native Niteroi.

Having taken a conscious decision to dive into coaching early, Lemos chuckles that having experienced life as both an athlete and coach, the latter is much more trying.

“I believe it is more difficult to be a coach than an athlete as it is not easy to control emotions and expect others to display the level of commitment and discipline that you expect.

“It is not always easy to get the athlete to do what is required to be a champion. Just imagine trying to develop champions from a group where everyone has a different personality and motivations,” he says, adding that his time on the mats prepared him for life in the coach’s chair.

“I think I have a slightly better understanding of what works for athletes since I have undergone similar training routines and can identify with the mindset.

“As a coach, you must often put yourself in the athlete’s shoes and look at how your instructions could be perceived. Sometimes, it is good to take a step back but at times, you need to stay firm, explain to the athlete how he can push his mind and body, and help him visualize the worth of his potential,” says Lemos.

Having tasted resounding success in both Brazil and the Emirates, Lemos admits he is humbled by the support of the UAEJJF and the UAE jiu-jitsu community in helping to drive his beloved sport and transform Abu Dhabi into the global home of jiu-jitsu.

“I love the UAE and all that they have done for the sport. All of us, the entire jiu-jitsu community, is extremely grateful to His Highness Sheikh Mohamed Bin Zayed Al Nahyan, Crown Prince of Abu Dhabi and Deputy Supreme Commander of the UAE Armed Forces, for his support towards developing the sport in the UAE. At the same time, the UAEJJF chairman, Abdul Munam Al Hashemi, has been a huge pillar of support for the sport and for me.

“The time and resources that the UAE and the UAEJJF have invested in elevating the country’s standing on the global jiu-jitsu stage is a huge positive for a coach. When you know that your efforts will be supported, you tend to go the extra mile and work a little harder to bring constant success,” he added.

The passionate coach is keen to maximise the unwavering support of the federation to elevate the technical and physical prowess of the UAE’s jiu-jitsu athletes.

With optimum physical conditioning a key component for on-mat success, Lemos says that the development of a holistic training programme, in consultation with the wider UAEJJF technical team, is under way.

“We need to improve the physical conditioning and the nutrition of our fighters. Improving these aspects will see a natural uplift in their technical performance and so we are launching a complete fitness programme which will include regular assessments for athletes to constantly measure their progress,” he said.

“The UAEJJF’s goal is to construct a programme that invests heavily in the constant development of athletes and to introduce growing levels of professionalism in the UAE Jiu-Jitsu Team’s fighters.”