Ton-up Lynn steers Lahore into semis with victory over Multan 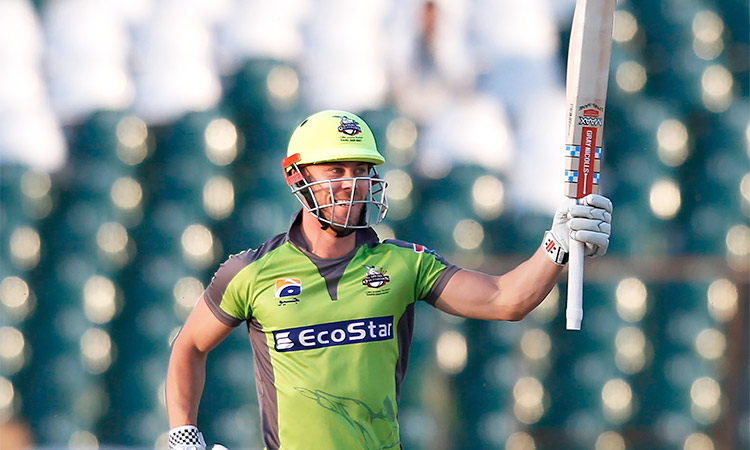 Lahore Qalandars’ Chris Lynn celebrates after his century against Multan Sultans during their Pakistan Super League match in Lahore on Sunday. Associated Press

Chris Lynn scored his career-best 113 not out as Lahore Qalandars defeated Multan Sultans by nine wickets at Lahore’s Gaddafi Stadium to book a spot in the HBL PSL 2020 semi-finals.

This was the 29-year-old’s second century in T20 cricket in which he smashed 12 fours and eight sixes.

Over the course of his 55-ball knock, Lynn crafted a blazing 100-run opening partnership – stretching over 54 balls – with Fakhar Zaman, who scored his second half-century of the season, that set the tone for Qalandars to surmount the 187-run target with seven balls spare.

He then paired with Sohail Akhtar for an unbeaten 91-run stand in which the Qalandars captain mostly took the backseat to watch Lynn smack Sultans’ bowlers all over the dial.

Qalandars’ openers made the most of the Powerplay overs, smoking 12 fours and a six to bring up 72 runs in 36 balls.

Fakhar scored an impressive 57 – which included seven fours and two sixes – in his 35-ball-long stay at the crease. He was stumped off Usman Qadir, playing his maiden HBL PSL match, on the last ball of the ninth over.

That the Qalandars’ batsmen had a towering total to chase was due to Khushdil Shah’s blistering 70 not out, which he had scored at a strike rate of 241.

The left-handed batsman came into bat with Sultans 79 for three in 11 overs and clubbed five fours and six sixes.

The 25-year-old showcased his batting prowess in the death overs as he clobbered Haris Rauf for two and three maximums in the 17th and 20th overs respectively and dispatched Dilbar Hussain for three fours and a six in the 18th over as Sultans piled up 77 runs in the last five overs.

Prior to Khushdil’s arrival at the crease, Shan Masood (42 off 29) and Ravi Bopara (33 off 36) knitted a 75-run stand to provide stability to Sultans’ innings after the dismissals of their openers Moeen Ali (one off five) and Zeeshan Ashraf (two off three) in the first two overs.

Despite the defeat, Multan Sultans finish the group-stage at the top of the points table with 14 points from six wins. Lahore Qalandars finish at the third spot with 10 points – coming from five wins.

Meanwhile, former Pakistan pacer Shoaib Akhtar has heaped praise on star batsman Babar Azam, saying he is one of the greatest finds of Pakistan cricket.

“When you will bowl to Babar Azam on such an easy batting wicket, then you will have to bear the consequences. Babar is one of the greatest finds of Pakistan,” Akhtar said in a YouTube video as quoted by Cricket Pakistan.

Azam is the T20I captain of Pakistan and is currently playing for Karachi Kings in the Pakistan Super League (PSL). The 25-year-old has scored 313 runs in nine matches at 52.16.

Meanwhile, the Pakistan Super League (PSL) franchises have requested the Pakistan Cricket Board (PCB) to move Lahore’s remaining matches of this year’s edition to Karachi.

According to a report, some of the franchises feel that it does not matter if the games take place in Lahore or Karachi as they will be played in front of empty stadiums.

The report says the franchises are also ready to bear travelling costs while moving to Lahore as most of the teams are currently based in Karachi.

The PCB has already rescheduled the remaining matches of the Pakistan Super League due to the coronavirus outbreak.

The meet has been cut by a day and the semi-final and finals will now be played on March 17 and 18 respectively.