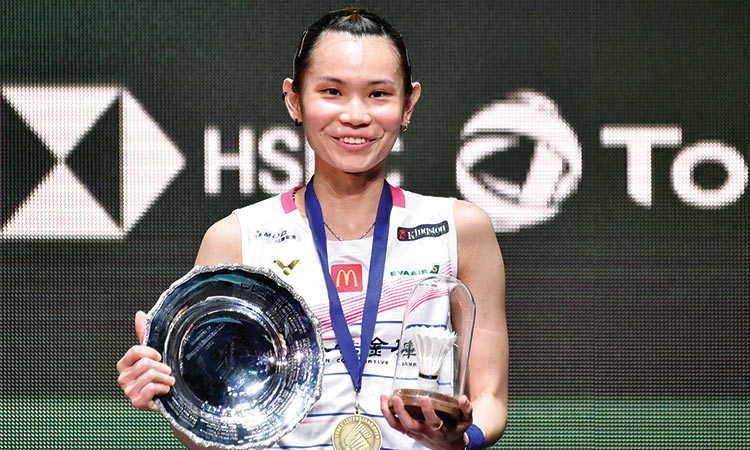 Tai Tzu Ying poses with her trophy after beating Chen Yu Fei in the Women’s final at the All England Open on Sunday. Asscociated Press

London: Chinese Taipei’s Tai Tzu Ying beat China’s Chen Yu Fei to win the women’s singles title at the 2020 All England Championships. This is the third time that the world no.2 has won the tournament which she and Chen (no. 1) have dominated since 2017.

“I am very familiar with Chen Yu Fei now because we have played each other many times and she is playing very well at the moment,” said Tai after the match through a translator.

“She is a very stable player and I tend to make a lot of mistakes which puts me under a lot of pressure. So today I am very happy that I could control the rallies.”

Asked about the support she gets at the Championships, Tai answered in English: “I really like to play in this environment, thanks to all for your support.”

She won her first All England title in 2017 and succesfully defended it in 2018. Chen then won the Championships last year.

“I’m a sensitive guy. If you are not thrilled to stand here in an All England final in front of such an audience, then you are not a human being,” said a tearful Axelsen following his triumph.

On paper, Chou Tien-chen, the tournaments number one seed, was the favorite but the second-seeded Dane had won nine out of their past 11 encounters.

Axelsen won the first set by controlling play with very few unforced errors and tsunami of smashes that wrong-footed his hapless opponent.

In the second set, Chou desperately needed to get back in the game but the Dane’s continued control was not eased. It was the second year in a row that the Dane appeared in the All England Final.

Meanwhile, Yuki Fukushima and Sayaka Hirota stormed to the women’s doubles title at the Yonex All England Championships - and said it was a case of third time lucky under the Arena Birmingham lights.

The third seeds were in inspired form in the first final on Sunday afternoon, brushing aside Du Yue and Li Yinhui with ease to hold their maiden Yonex All England trophy aloft.