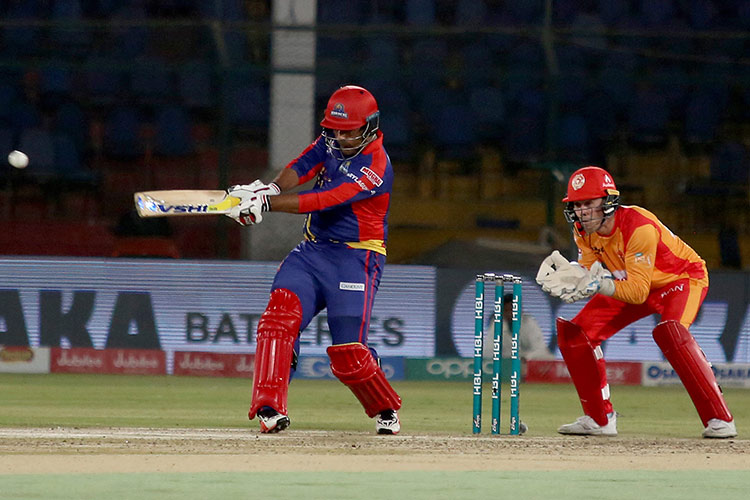 Chasing an easy total of 136, Kings went over the line with four balls to spare.

Sharjeel Khan and Babar Azam gave them a flying start, amassing 60 runs in just five overs. Sharjeel was more brutal of the two as he smashed a 14-ball 37, which included four sixes and three boundaries.

United struck back and Kings lost a few wickets in quick successions. Chris Jordan and Umaid Asif steered the faltering innings and took them over the line with four balls to go.

Meanwhile, Pakistan's Twenty20 league will continue despite closed stadiums and an exodus of foreign players who are heading home amid the coronavirus crisis, cricketing authorities in the country said.

The Pakistan Cricket Board (PCB) said upcoming matches would be played in an empty stadium in Karachi, and offered teams and individual players the option to withdraw from the league.

Many have done so, including Alex Hales (England) of the Karachi Kings; Rilee Rossouw (South Africa) and James Vince (England) from the Multan Sultans; and Peshawar Zalmi's Tom Banton, Liam Dawson, coach James Foster, Lewis Gregory and Liam Livingstone (all from England).

In addition, Peshawar Zalmi's Carlos Brathwaite (West Indies) and the Quetta Gladiators' Jason Roy and Tymal Mills (both from England) will also leave.

"All players and support personnel have been given the option to withdraw from the PSL 2020 should they wish to do so," the PCB said in a statement, adding that no player had to date tested positive for coronavirus.

Lahore is set to stage two elimination matches on March 18 and 20, as well as the final two days later -- likely without spectators.

Pakistan are also due to host Bangladesh for a one-day international (April 1) and a Test (April 5-9) -- both in Karachi. The PCB has not yet decided the fate of those matches.

Pakistan has recorded 21 confirmed cases of the novel coronavirus -- including several in Karachi -- but no deaths, according to Mumtaz Ali Khan from the National Institute of Health.

However, there are fears that officials have yet to test large swathes of the population in earnest due to a lack of resources and decades of underinvestment in the country's health sector.

This year's PSL tournament is the first in the league's five-year history to be played in its entirety on home soil.

Previous seasons saw a portion of matches held in the United Arab Emirates over security fears.

Meanwhile, Following the PCB's decision to provide an option to squad members to withdraw from the ongoing HBL Pakistan Super League 2020, four Islamabad United players and a member of the coaching staff have decided to return home.

As such, the PCB will facilitate their safe return and United, who played their last group match against Karachi Kings on Saturday at the National Stadium, can bring in the players’ replacements following the Event Technical Committee’s approval, as per the HBL PSL 2020 regulations.

Elsewhere, all-rounder Hammad Azam has been included in the Peshawar Zalmi squad with immediate effect.

Separately, following an advice from the Punjab Government, the Pakistan Cricket Board has decided the final-leg matches of the HBL Pakistan Super League 2020 in Lahore will be played behind closed doors.

The decision will not impact accredited commercial partners, media and other service providers, who will be allowed to enter the Gaddafi Stadium.

In addition, immediate families of the competing players and player support personnel as well as franchise owners will be allowed to attend matches.