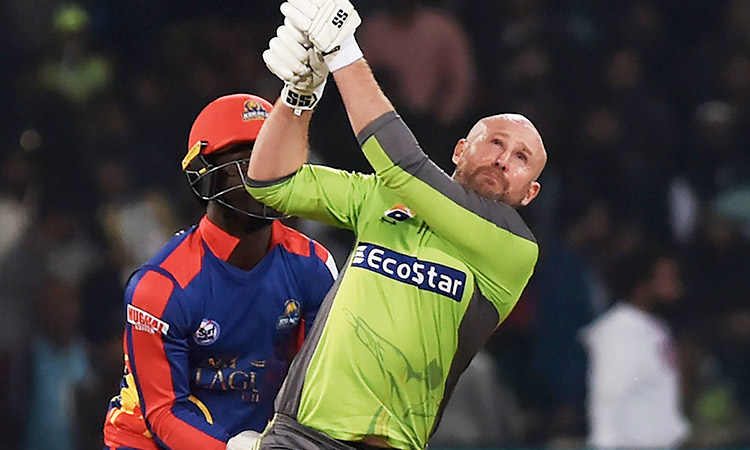 Lahore Qalandars’ Ben Dunk hits a shot against Karachi Kings during their PSL match at the Gaddafi Cricket Stadium in Lahore on Sunday. Agence France-Presse

Ben Dunk broke his own record of most sixes in a PSL game within a week when he smashed 12 towering sixes against karachi Kings in an unbeaten 99 off just 40 balls on Sunday night.

The blistering knock earned Lahore a resounding eight-wicket win with five balls to spare as the home team raced to 190-2.

Dunk went agonizingly close to a century last Tuesday, too, when he smashed 10 sixes against defending champion Quetta Gladiators in a match-winning knock of 93 not out.

“I think no one realistically will remember whether it was 100 or 99 not outs,” Dunk, who will turn 33 on Wednesday, said. “Most people who came tonight remember that we won the game and I think that’s something that I’ve always prided myself on … and we’re right back in the tournament again.”

And every time Dunk has struck big, the powerful left-hander has celebrated it by blowing a bubble to the great delight of his franchise Lahore Qalandars fans at the Gaddafi Stadium.

“No special things in it, I’m just trying to stay calm in the middle, really,” Dunk said of his celebration. “It’s sort of a little idiosyncrasy, I guess, that I do and probably a bad habit that I should probably stop. But I just try and do it to keep me calm and keep my mind on the task at hand.”

Dunk’s exploits with the bat have changed Lahore’s fortunes. With three league games still in hand, Lahore could make it to the playoffs for the first time in five years after finishing at the bottom of the standings in the previous editions of the tournament. Dunk’s ferocious hitting had left bowlers clueless in the PSL. No matter at what length a spinner or a fast bowler has bowled, Dunk has dispatched it over the boundary with apparent ease on both sides of the wicket.

Be it experienced left-arm fast bowler Mohammad Amir or Pakistan’s No. 1 choice Twenty20 left-arm spinner Imad Wasim, both got punished by Dunk on Sunday. But Dunk, a journeyman who has played in T20 leagues in four countries, believes he’s one of the lucky players to be part of the PSL.

“There’s so many cricketers who want to play in this tournament, both locally here and around the world,” Dunk said.

“I’m certainly in no position to dictate where I bat … I’m happy to keep (wickets), happy to bat, happy to bat at 11 and happy to try and bowl if that’s what the team needs.  I just want to try and do the best that I can for the team.”

He bowls some right-arm offspin, bats left-handed and take the gloves behind the stumps.

Dunk, who hails from Australia’s northern Queensland state, has played five Twenty20 internationals for Australia, making his debut in 2014 against South Africa at Adelaide.

Despite his recent form, he doesn’t see himself in the plans of coach Justin Langer for this year’s Twenty20 World Cup in Australia.

“Fortunately enough, in Australia we’ve got quite a few good players. I would assume JL (Justin Langer) would certainly be following (the PSL), but I would say I am well off the radar.”

Dunk is also inspired by the big crowds in the PSL both at Lahore and Rawalpindi as the Twenty20 league is being played in its entirety for the first time in Pakistan since it was launched in 2016 in the UAE.

“The crowds have been amazing, they’re almost like our 12th man,” he said.