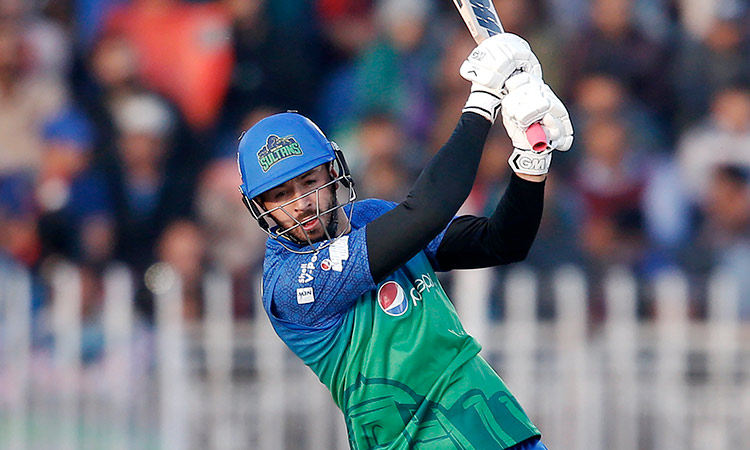 Multan Sultans’ James Vince plays a shot against Islamabad United during their PSL match in Rawalpindi on Sunday. Associated Press

An unbeaten half-century by James Vince lifted Multan Sultans into the playoffs of the Pakistan Super League (PSL) after a thumping nine-wicket victory over Islamabad United in yet another rain-shortened game at Rawalpindi.

Vince plundered 11 fours and a six in scoring 61 not out off a mere 24 balls as Multan motored to 94-1 in 6.4 overs against two-time champion Islamabad.

After a wet outfield due to overnight rain curtailed the match to nine overs a side at the Pindi Cricket Stadium, Islamabad could only score 91-7 despite Colin Munro (25) hitting veteran Shahid Afridi for three successive sixes in the fourth over.

Multan’s other legspinner Imran Tahir (2-13) of South Africa and Pakistan discard left-arm fast bowler Junaid Khan (2-17), playing his first game in this PSL season, then shut down Islamabad in the latter half of the innings.

Imran got rid of the dangerous Munro off his third ball when the left-hander top-edged a slog sweep to short fine leg.

Captain Shadab Khan (14) also holed out in the deep against Imran’s legspin.

Junaid, who had earlier got rid of opener Luke Ronchi, then had Asif Ali caught off his own bowling as Islamabad could score only 39 runs in the last five overs.

Vince took the game away when he slammed five successive boundaries against seamer Akif Javed in only the second over of Multan’s run-chase.

Legspinner Shadab was plundered for 30 runs off his two overs as Multan chased down the target with eight balls and nine wickets to spare.

Multan holds top place with 11 points from seven games in the six-team event and three league matches still in hand.

The top four teams will qualify for the playoffs.

After losing their fourth home game on Sunday, Islamabad are now on the brink of losing a place in the playoffs with seven points from nine games.

They will take on Karachi Kings in the last game on March 14, but even a win in Karachi may not be enough.

Hosts Lahore had 49 balls remaining as Quetta lost their fourth straight game in the Pakistan Super League after Patel struck on a sharply turning wicket.

Patel bamboozled Quetta’s top-order batsmen with his left-arm spin with the score 21-6 after six overs.

Hafeez and Dunk put on an unbeaten 68 runs off 41 balls as Hafeez finished off the game with a six over long-off off legspinner Zahid Mahmood, who played instead of Naseem Shah after the fast bowler was ruled out for at least two matches due to a sprained ankle.

Lahore is at the bottom of the table with four points from two victories in six games while Quetta holds the No. 5 spot.

Colin Munro (52), who also survived an early chance, added his third half-century in this season’s PSL as his team amassed 195-5 in 20 overs. Colin Ingram (41) and Rizwan Hussain (5) were also dropped.