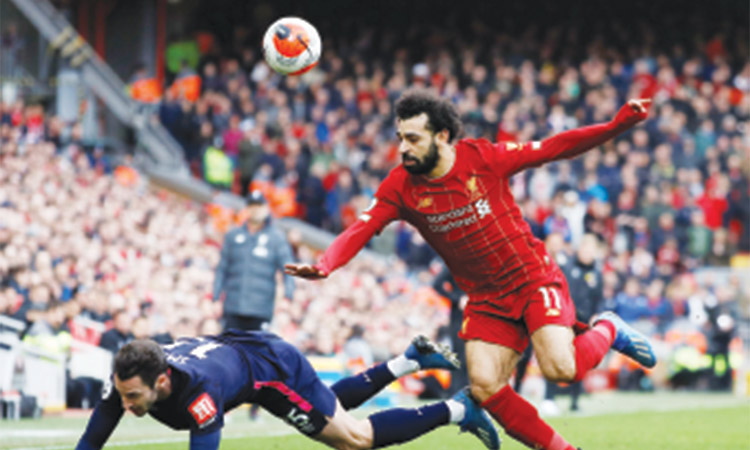 Callum Wilson’s controversial early opener sent shockwaves around Anfield after a run of three defeats in four games in all competitions.

However, the prolific duo of Mohamed Salah and Sadio Mane quickly turned the game around and a heroic goal-line clearance from James Milner in the second half secured the win to open a 25-point lead at the top of the table.

Jurgen Klopp’s decision to make seven changes for Tuesday’s 2-0 defeat at Chelsea in the FA Cup had been questioned as Liverpool lost the chance to build some momentum heading into a big week.

Atletico Madrid visit fortress Anfield in the Champions League on Tuesday hoping to defend a 1-0 first leg lead and despite the enormity of that clash, Klopp only rested Andy Robertson although first-choice goalkeeper Alisson Becker was also sidelined by a hip injury. The spread of coronavirus could have a big impact on the Reds’ title celebrations in the weeks to come with the possibility of games being played behind closed doors. But the abandonment of the normal pre-match ritual of handshakes was the only disruption to the Premier League calendar this weekend. Liverpool’s dip in form has coincided with a lack of clean sheets for Klopp’s men after a run of 10 in 11 league games between early December and mid-February.

The hosts’ backline was breached again after just nine minutes, although Klopp was rightly furious that VAR did not intervene to disallow the goal.

Joe Gomez was knocked off balance by Wilson to start the move and the Bournemouth striker then had the simple task of tapping home Jefferson Lerma’s cross. Defeat leaves the Cherries still in the bottom three. They were left to rue not making even more of a bright start as stand-in goalkeeper Adrian turned over Nathan Ake’s powerful header.

Bournemouth played a large part in their own downfall and settled Liverpool’s nerves when substitute Jack Simpson gifted possession to Mane in a dangerous position. Despite a poor pass from the Senegalese, Salah steered the ball into the bottom corner to mark his 100th Premier League appearance for the club in style.

Eight minutes later, Liverpool led when Bournemouth again gave the ball away cheaply. Virgil van Dijk released Mane in behind and he kept his cool to slot into the far corner.

Meanwhile, Alexandre Lacazette came off the bench to keep Arsenal in the hunt for a Champions League place as his late strike survived a VAR review to seal a vital 1-0 win against West Ham on Saturday.

Mikel Arteta’s side struggled to find any momentum for long periods at the Emirates Stadium and could easily have been behind before Lacazette settled a scrappy London derby. The French striker turned in Mesut Ozil’s header with 12 minutes left, but it took several minutes before VAR finally confirmed the German was onside when he laid on the goal.

Earning a Champions League berth still looks a long-shot for Arsenal, especially after this uneven display. But the Gunners, who face Manchester City on Wednesday, are unbeaten in their last eight league games and showed commendable spirit to make the late breakthrough.

West Ham have lost five of their last seven league games and, with only one win in their past nine, they are destined for a nervous finish to the season as they battle to avoid relegation.