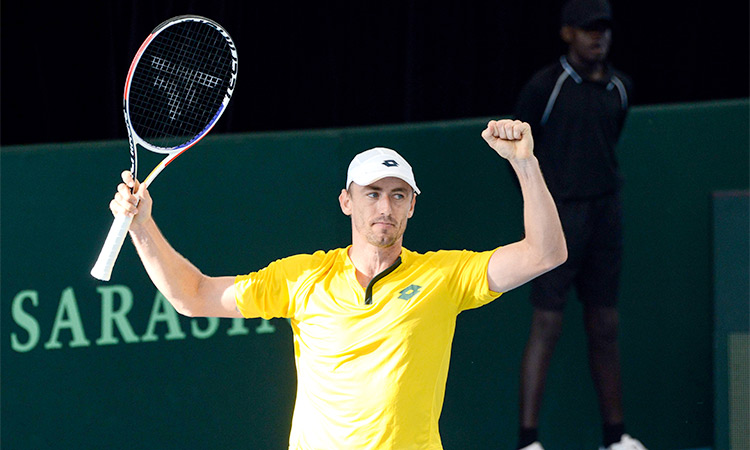 John Millman of Australia reacts after winning his Davis Cup qualifying tie against Brazil in Adelaide on Friday. Agence France-Presse

A rousing comeback saw John Millman stun Thiago Seyboth Wild to give an Australian team missing Nick Kyrgios a 2-0 lead over Brazil in their Davis Cup qualifier on Friday.

With a slot in the Madrid finals at stake, Jordan Thompson put the home team on the front foot in the opening singles, beating the experienced Thiago Monterio 6-4, 6-4 at Adelaide’s Memorial Drive.

It looked like the visitors would strike back in the second rubber as rising star Seyboth Wild, who won his first ATP title in Chile last week, served for the match at 5-4 against Millman.

But the Australian, cheered on by a patriotic crowd, broke back and took the second set in a tiebreaker before running away with the third to post a gutsy 4-6, 7-6 (7/0), 6-2 win.

Earlier Thompson, who improved his Davis Cup record to 7-4, ensured Australia started on a winning note.

The opening set went with serve until he lifted his intensity to convert on his first set point with the help of a netted forehand.

He carried the momentum into the second as Monterio’s error count mounted, racing to a 4-1 lead before his focus lapsed and the Brazilian roared back to 4-4.

But it was ultimately Thompson’s day, with another break in the 10th game handing him victory.

Hewitt’s team is without Kyrgios who is dealing with a wrist injury that forced him to retire in Acapulco last month, while Alex De Minaur was a late withdrawal as he struggles to get over an abdominal tear. Alex Bolt and John Peers were called up instead with the doubles and reverse singles on Saturday.

The winner of the tie will join 11 other qualifiers and the 2019 semi-finalists — Canada, Britain, Russia and Spain — along with wildcards France and Serbia in the Davis Cup finals in Spain in November.

Ecuador took an early 2-0 lead against Japan with nail-biting victories in their Davis Cup qualifier on Friday in western Japan, held behind closed doors due the coronavirus outbreak.

Uchiyama came back in the second set by breaking Quiroz twice and mixed his sizzling forehand shots with delicate volleys to force his opponent to make mistakes.