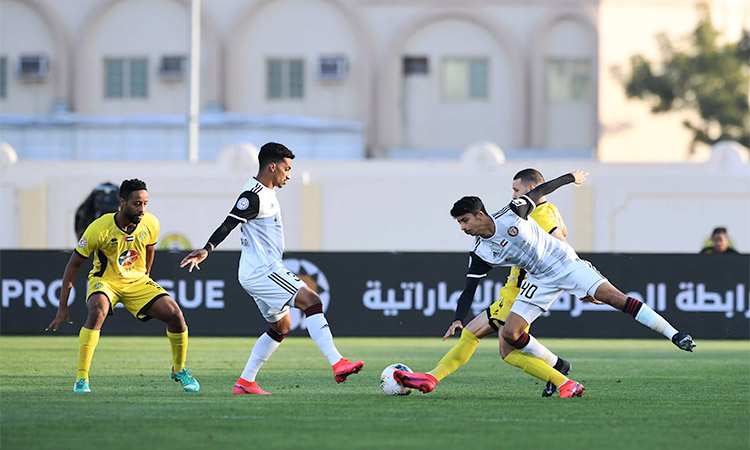 Players of Al Jazira and Kalba vie for the ball during their Arabian Gulf League match on Friday.

Al Jazira started in an electrifying fashion, when Khalfan Mubarak found Keno in a dangerous zone and the latter went past the goalkeeper, however, his effort was cleared off the goalline by Willian Gabriel in the fourth minute.

Al Jazira continued to be the better side and in the 18th minute, they were awarded a penalty kick after Ali Mabkhout was brought down inside the box by Jamal Al Sarrah. The Veteran striker sent the ball home from the spot to snatch the lead for his side. The Tigers leveled things up in the 33rd minute through Ricardo Gomes, who converted Navarone Foor’s accurate cross with a powerful towering header.

Just one minute after the restart, Omar Abdulrahman released Mabkhout with defence-splitting through pass, but his failed to finish past Al Sarrah, who pulled off a clever save.

Around the 70-minute mark, Al Jazira regained their lead when Mabkhout scored his second of the night. Abdulrahman sent an in-swinging cross from the corner kick that was headed by Mabkhout after a touch by Kalba’s defender.

The win takes Al Jazira to the third spot with 33 points ahead of their anticipated derby clash against Al Ain next week. Meanwhile, Kalba occupy the 11th spot with 16 points before traveling to Bani Yas.

In another match, Panadero’s early goal made the difference as Al Wahda edged Ajman 1-0, at Al Nahyan Stadium.

Al Wahda got off to a quick start as they wasted a glorious chance to break the deadlock just three minutes into the game through Sebastian Tagliabue, who failed to finish Ismael Matar’s cross past Ali Al Hosani.

Less than one minute later, Tagliabue was once again at heart of attack for the Clarets when he found Gaspar Panadero with a perfectly weighted through pass that the Spaniard rifled into the back of the net.

Al Wahda kept dominating the majority of position, but failed to create any real threats until the referee blew the halftime whistle.

The Oranges responded in the second half, when Issam Faiz went past Al Wahda’s defenders and sent a cross that was poorly handled by Mohammed Al Shamsi to reach Humaid Abdullah, who failed to finish into the empty net in the 53rd minute.

10 minutes later, Panadero nearly doubled his tally as he received the ball up the left wing and cut inside, however, his right footed curler cannoned off the crossbar.

In the dying moments of the game, Khalil Ibrahim went up the right wing and sent a low cross inside the box that was met by Yahya Al Ghassani’s diving header. Hosani pulled off an excellent double save to deny Ghassani’s header and Tagliabue’s effort from the rebound.

Following the victory, Al Wahda sit fifth with 32 points before their away match against Al Dhafra. On the other hand, Ajman remain tenth with 18 points.

Al Wasl got off to an electrifying start, as they went 1-0 infront in the 11th minute through Welliton. The Brazilian scored from the rebound after Natan Felipe’s initial strike was poorly saved by Khalid Al Senani.

The Cheetahs kept pushing forward and in the 38th minute, Felipe found Welliton who squared the ball to Fabio De Lima with a clever backheel pass. The number 10 went on a one-on-one situation with Al Senani, who pulled off a great save to deny the forward’s effort.

Just 10 minutes after the restart, the Western Knights leveled things up when Khalid Bawazir’s crossed ball was met by Joao Pedro, who rifled into the back of the net with a composed first time strike.

Around the 75-minute mark, Al Wasl restored their lead when Haboush Saleh intercepted the ball and released Welliton up the left wing. The striker squared it to Lima who was completely unmarked and finished easily into the top corner to make it 2-1.

To rub salt into the wound, Al Dhafra’s Abdulrahman Yousef was shown a red card for his undisciplined challenge against Lima.

Following the win, Al Wasl remain eighth with 26 points ahead of their trip to face Hatta next week. Meanwhile, Al Dhafra sit sixth with 29 points before hosting Al Wahda in matchweek 19 of the Arabian Gulf League.