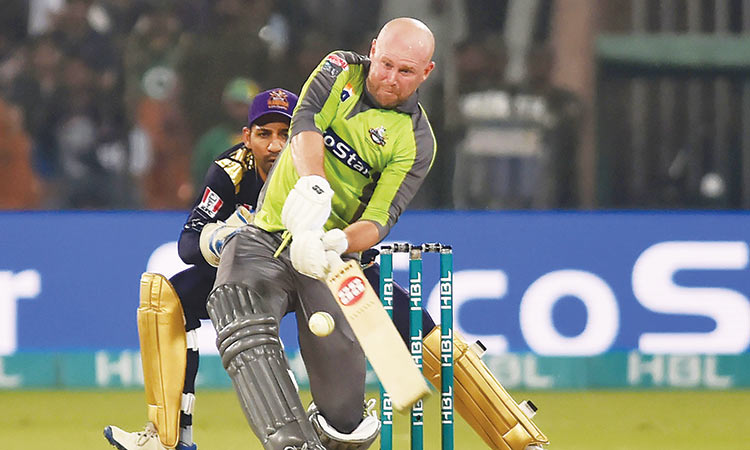 Lahore Qalandars’ Ben Dunk plays a shot against Quetta Gladiators during their PSL match in Lahore on Tuesday. Agence France-Presse

Dunk and Patel crafted an incredible partnership of 155 runs, the highest fourth-wicket stand and second highest overall in HBL PSL history, in 73 balls to help Qalandars to a mammoth 209 for five.

Dunk blasted 10 sixes and three fours in scoring 93 off 43 deliveries and Patel made an equally entertaining 71 off 40 balls in Lahore’s strong total of 209-5.

Dunk, who batted at one-drop, smashed 10 sixes, the most in an HBL PSL innings, as he scored a blistering 93 at a strike-rate of over 216.

The Australian wicketkeeper-batsman struck Mohammad Nawaz, the left-arm orthodox, four sixes in an over in his 43-ball knock, which also included three fours.

From the other end, Patel also scored at a brisk rate which amplified the woes for Gladiators, the defending champions. The all-rounder scored 71 runs from 40 balls, smashing nine fours and two sixes.

The pair had come together with the Qalandars struggling at 50 for three after Mohammad Hafeez’s first-ball duck in the eighth over. Their extraordinary power-hitting set alight the crowd filled to the stadium’s 27,000-capacity.

Both batsmen were dismissed by Ben Cutting, who with two wickets for 36 runs in three overs was the most successful bowler for Sarfaraz Ahmed-led Gladiators. Mohammad Nawaz, Fawad Ahmed and Mohammad Hasnain picked a wicket each.

Gladiators faltered right from the onset of their run-chase as they lost three wickets in the Powerplay as Patel and Dilbar Hussain added two and one scalps to their tally.

Gladiators spent their remaining innings looking to rebuild their innings and a late surge by Ben Cutting (53 off 27, three fours and five sixes) gave a ray of hope, but Qalandars’ bowlers continued to strike on regular intervals.

Salman Irshad, who came in as a replacement for Haris Rauf, was the pick of the bowlers with four wickets for 29 runs. Patel, Dilbar and Mohammad Faizan were the other bowlers to have wickets in their accounts as they picked up two scalps each.

Gladiators were bowled out for 172 on the last ball of their innings.

Meanwhile, Peshawar Zalmi captain Darren Sammy, refuted rumours that had surfaced over a cryptic message he posted earlier, saying the franchise was “my baby and nothing comes between us”.

In a Twitter post, Sammy wrote: “I can’t believe that the media would think that my bro @JAfridi10 and I would ever have an issue. I’m actually laughing at this. Listen guys I love this man as my own brother.

“Are u guys serious @PeshawarZalmi is my baby and nothing comes between us. Absolutely nothing!”

Earlier, the Zalmi captain had posted a puzzling message in what was seen by some as signs of friction between him and his franchise.

“I’ve learnt that you are important until you’ve completed your role. #dealingwithhumans,” Sammy had tweeted shortly after he was “rested” by Peshawar for their match against Karachi Kings.

Since then, there has been a dearth of information on what made Sammy say such a thing and if it was indeed linked with him not featuring against Karachi.

Zalmi had preferred compatriot Carlos Brathwaite over Sammy against Karachi last night. The decision was taken after Sammy’s struggles for form and fitness, during which time Zalmi have descended to fifth on the PSL 2020 points table.

However, their gamble did not work as well as they had hoped, with Brathwaite scoring just 8 runs in Peshawar’s thumping defeat to Kings although he bowled fairly well for his 13-1 in 2 overs.