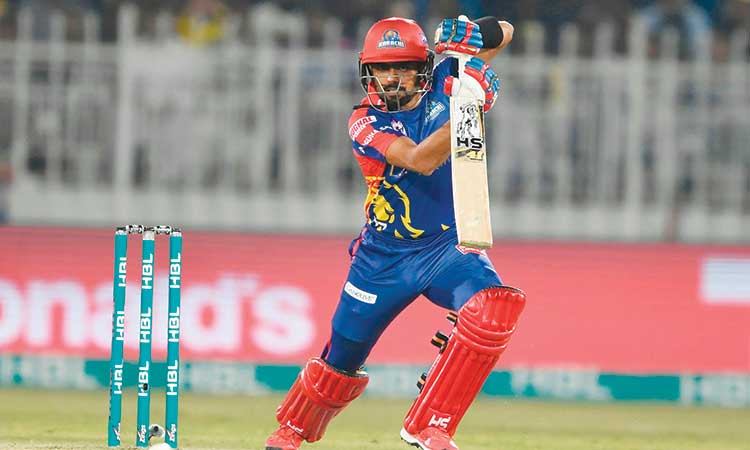 Karachi Kings’ Babar Azam plays a shot against Peshawar Zalmi during their PSL match at the Rawalpindi Cricket Stadium on Monday. Agence France-Presse

Mohammad Amir grabbed 4-25 and Babar Azam notched a brilliant unbeaten 70 as the Karachi Kings jumped to third spot in the Pakistan Super League after beating the Peshawar Zalmi by six wickets on Monday.

Pakistan’s Twenty20 skipper, Babar, who was run out for 0 on Sunday in Karachi’s win over Islamabad, hit 10 fours in his 59-ball knock to earn their third win and second against Peshawar.

Hales missed a second successive half-century; he was dismissed for 49 off 27 balls that featured six fours and two sixes.

Amir had Tom Banton of England lbw off the very first ball via television referral. The left-arm fast bowler, in front of his hometown supporters at Pindi Cricket Stadium, also uprooted the off stump of Haider Ali off his third delivery as Peshawar slumped to 4-2 within the first three balls of the game.

Multan Sultans lead the table with eight points, the defending champion Quetta Gladiators are two points behind in second, ahead of Karachi on net run rate. The 2017 champion Peshawar slipped to fifth.

Meanwhile, fast bowler Haris Rauf will be replaced by Salman Irshad, the right-arm fast-medium bowler, in Lahore Qalandars’ camp after the former was ruled out due to an injury in his right foot.

Haris is likely to miss the next two to three HBL Pakistan Super League 2020 matches for his side.