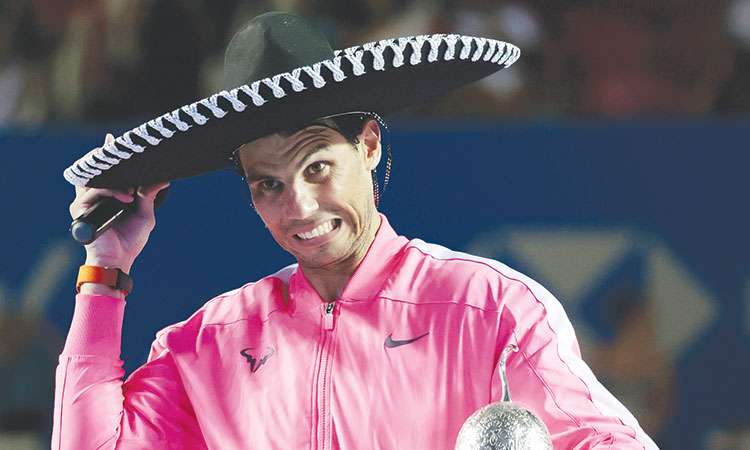 Rafael Nadal poses with the trophy after winning the Mexican Open final against Taylor Fritz on Saturday. Associated Press

The 33-year-old Nadal, playing in his first tournament since losing in the quarter-finals at the Australian Open last month, didn’t drop a set all week and improved to 19-2 all-time at this event.

“I couldn’t be happier. I played a great event from the beginning to the end,” Nadal said. “Acapulco was the first big title that I won in my career, so to be able to stay here after 15 years is amazing.

“I can’t thank enough the people who make me feel at home every single time.”

Nadal wasted no time figuring out Fritz’s game in the first career meeting between the two.

The 19-time Grand Slam winner made eight unforced errors and needed just one ace but it came in the final game of the second set to get to championship point.

Nadal closed it out with a blistering serve that handcuffed Fritz and gave Nadal his 85th career title.

Nadal ceded the world number one ranking to Novak Djokovic after the Australian Open, where the Serb won a record eighth title.

Nadal could have regained the top spot with a win in Acapulco, but he also needed Djokovic to fail to reach the final in this week’s Dubai event.

Nadal won the final eight points to take the first set. He seized control by breaking Fritz’s serve in the ninth game to go up 5-4. He then served for the set, winning four straight points.

On set point he hammered a serve which Fritz barely got back. That set up an overhead smash for Nadal which he put away nicely.

Nadal broke Fritz twice in the second set, including the fifth game to go up 3-2. He broke Fritz again to take a 5-4 lead and then served out the match.

In the women’s final, seventh seeded Heather Watson captured her first WTA title in three years by grinding out a 6-4, 6-7 (6/8), 6-1 win over Canadian teen Leylah Fernandez.

Meanwhile, Aryna Sabalenka won her sixth career title on Saturday when she swept past former two-time Wimbledon champion Petra Kvitova 6-3, 6-3 in the Qatar Open final and dedicated victory to her father who died last year.

The Belarusian ninth seed’s win over the eighth-seeded Czech, who was Qatar champion in 2018, will see her rise to 11 in the world rankings on Monday.

The 21-year-old said the memory of her father Sergey, who died in November, was very much in her mind on Saturday.

“It was a long journey here and I put everything on tennis,” Sabalenka told www.wtatennis.com as she described the influence of her father.

“I was actually only playing tennis and focusing on tennis and nothing else. And I think I gave everything for tennis. And I just lost my dad in the pre-season and he was my biggest motivation, and I’m doing it for him.”

Sabalenka fired seven aces and 21 winners past Kvitova who was playing in her 37th WTA final.

“She didn’t give me anything for free, I had a chance once in the second set to break her serve, but I just couldn’t make it.”