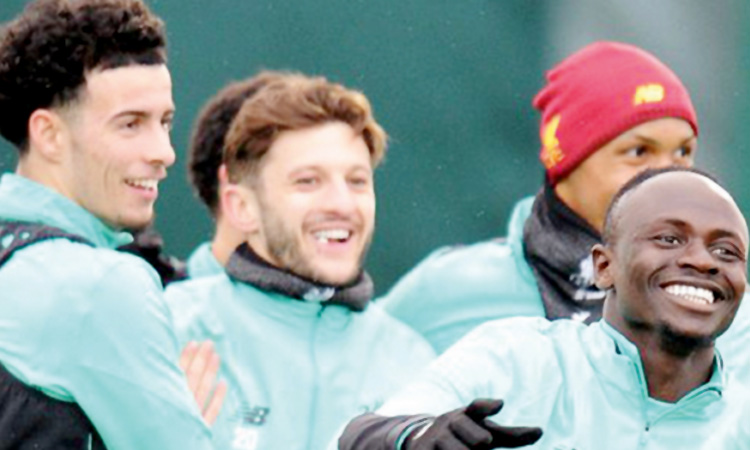 Liverpool players attend a training session on Friday, ahead of their English Premier League match against Watford.

Liverpool can make Premier League history at Watford on Saturday as the runaway leaders aim to move within three wins of clinching the title.

While Jurgen Klopp’s side are racing towards the title, the battle to qualify for the Champions League and the struggle to avoid relegation look set to go down to the wire

Chelsea, Manchester United, Tottenham and Wolves can all bolster their European hopes this weekend, with West Ham, Norwich, Bournemouth and Watford among those scrapping for survival.

The Reds equalled Manchester City’s English top-flight record of 18 consecutive league wins, set between August and December 2017, when they fought back from 2-1 down to beat West Ham 3-2 on Monday.

Klopp’s men, who need four victories from their final 11 games to guarantee the title, can break City’s record with win number 19 at Vicarage Road.

With second-placed Manchester City on League Cup final duty against Aston Villa on Sunday, a victory against the struggling Hornets would put Liverpool 25 points clear at the top.

If they do win their next four games, they will lock up the title with seven matches to spare, beating the Premier League record of five, which is currently shared by Manchester City in 2017-18 and Manchester United in 2000-01.

Undefeated in their past 44 league matches, Liverpool are also five games away from equalling Arsenal’s record of 49 unbeaten across 2003 and 2004. It would be a huge upset if second-bottom Watford stop Liverpool. They have lost the past four meetings, conceding 15 times and failing to score a single goal.

Asked for the secret of Liverpool’s success, Reds defender Virgil van Dijk said: “Not being nervous, that is the main thing.

“Keep playing and keep pressing. There will be moments when the opponent is going to have problems if we keep doing the same thing.”

With only seven points separating troubled Chelsea in fourth place and resurgent Arsenal in ninth, reaching next season’s Champions League will be a tight squeeze for the six clubs in contention.

Leicester, in third place, appear well set despite a recent wobble. Fifth spot could be enough to ensure qualification depending on the outcome of second-placed Manchester City’s appeal against their two-year ban from European competition.

Chelsea could be in danger after Tuesday’s chastening 3-0 home defeat against Bayern Munich in the Champions League last-16 first leg.

Blues midfielder Jorginho said Frank Lampard’s side cannot afford to feel sorry for themselves at Bournemouth on Saturday.

“It is really tough for the changing room, but we just have to believe in ourselves, and not put our heads down,” Jorginho said.

“We need to keep working, keep pushing, because we are a good team.”

If Chelsea lose on the south coast, Manchester United would move above them on goal difference, provided they win at Everton.

Tottenham, in sixth, host Wolves, with their eighth-placed visitors just one point behind them.

Hamstrung by injuries to Harry Kane and Son Heung-min, Jose Mourinho’s side were beaten by Chelsea in their last league game, prompting their manager to hint he does not expect a successful end to the season.

Arsenal, who are unbeaten in seven league games, are not in action this weekend.