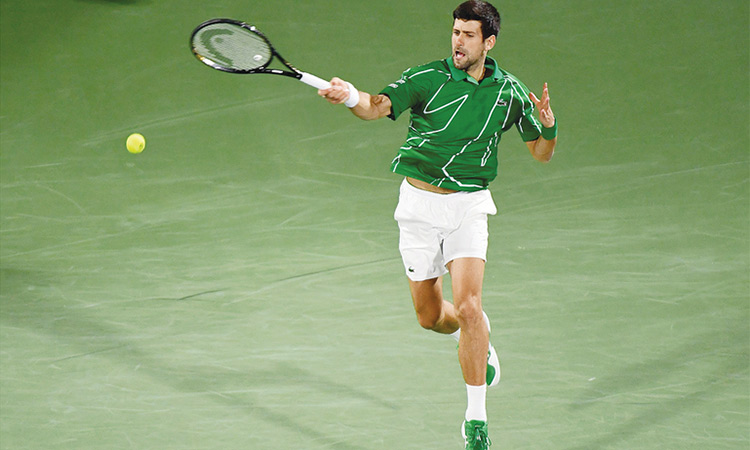 Novak Djokovic returns the ball to Gael Monfils (unseen) during their semi-final match of the Dubai Duty Free Tennis Championship on Friday.

It was the 17th win of the season for the world number one and a 17th career win over Frenchman Monfils without a loss.

Djokovic will play on Saturday for a fifth Dubai trophy against Stefanos Tsitsipas after the second seed and 2019 finalist beat Dan Evans 6-2, 6-3.

The Serbian fought off three Monfils match points in the second-set tiebreaker, as the Frenchman committed forehand and backhand errors on his first two winning chances.

An increasingly weary Monfils blew the third with a double-fault.

Djokovic finally squared the semi-final at one set a-piece on his eighth set point before rolling on to victory in the third set after more than two and a half hours.

“It was an amazing escape,” said Djokovic who now has a 20-match win streak stretching from the end of last year.

“Gael was playing as well as he ever has.

“It was difficult to go through him. I have good defence, but what he did today was unbelievable.

“On the match points, I just hoped that he would miss on first serves, which he did. That gave me an opportunity to get into the points.

“I know Gael was injured and he could not play his best, but once he’s healthy, watch out.”

Tsitsipas, who lost the final a year ago to Roger Federer, won his eighth match in a row by seeing off Evans.

“It’s anybody’s game really,” said Djokovic. “He’s won eight matches in a row now from last week in France winning [the Marseille] title, now playing more or less every single day, which is quite impressive. It’s not easy… I hope I can recover. I hope I can be at my best because I need to start better than I have tonight. Hopefully I can get a title.”

The Greek lifted the trophy last Sunday in Marseille.

Tsitsipas could not fault his victory in 83 minutes over the 37th-ranked Evans in a first-time meeting.

“I managed to stay solid throughout the whole match, I didn’t have too much stress, I stayed quite calm and played well,” he said.

“I was dominating a lot from my forehand side, playing with a clear head and not thinking of too much, staying in the moment, trying to process of what potentially he’s going to use on the court.

“It was just a matter of time for me to take the lead and get up in the score.”

Tsitsipas, winner of 16 of his last 17 sets, won his 10th career match at the Aviation Club against two defeats.

British number one Evans was competing in his fourth semi-final at the ATP level.

He saved three match points against Pierre-Hugues Herbert in the second round and two set points in the quarter-finals against Andrey Rublev.

Meanwhile, John Peers and Michael Venus advanced to their first final as a team on Friday, beating Jurgen Melzer and Edouard Roger-Vasselin 7-6(2), 6-2.

The unseeded pairing saved all three break points it faced to claim its third straight-sets victory in as many matches this week.

Peers and Venus are competing in just their fourth event as a team.

Last month, the pair made its debut at the ASB Classic and also reached the Australian Open third round.