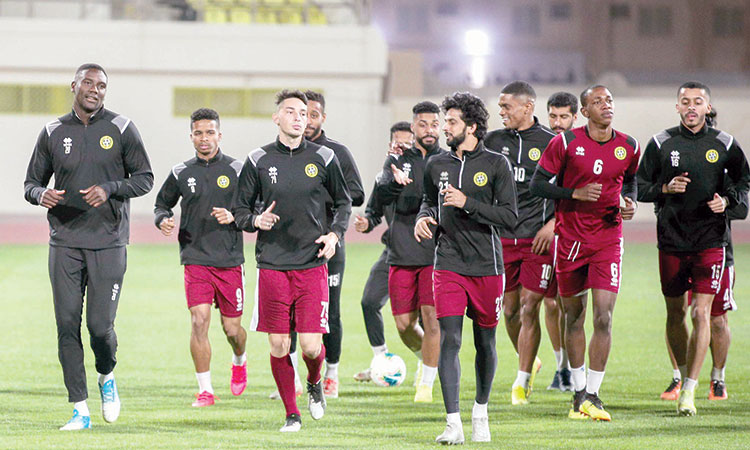 Ittihad Kalba players attend a training session ahead of their match against Fujairah.

Shabab Al Ahli will look to extend their lead at the top of the table with a victory over Bani Yas in their 17th round match of the Arabian Gulf League (AGL) on Friday.

Shabab Al Ahli are at the top of the standing with 36 points form 16 games. Second place Al Ain, who curtailed the lead with a victory over Hatta on Thursday, are still two points adrift to the leaders.

Shabab Al AHli assistant coach Diego attended the press conference on the behalf of head coach Rodolfo Arruabarrena as the latter was red carded during the previous round match against Al Jazira.

Diego said: “We return again to the league with the same team that we had a game with in the President Cup recently. We played a good match against Saudi Arabia’s Al Hilal in the Asian Champions League (ACL) and four days later with Bani Yas. There was some exhaustion, and now we have time to face the opponents.”

“We are playing a difficult game against a strong team, and we hope to give a better performance than that of the previous match against Bani Yas.

“The team is passing through a crucial time after successive losses and we are not used to it. We have all confident in the players to return to the winning ways,” he added.

Leaders Shabab Al Ahli will look to bounce back and end their losing streak. Bani Yas stunned Shabab Al Ahli 1-0 in the quarter-final of the President Cup. Prior to that, they had to face a 2-1 defeat against Al Jazira in the league.

“We are awaiting the return of the injured players, and the injuries have complicated the matter for us. We hope that all the injured players will return soon, so that we can play with a full-strength team,” he informed. “Leonardo returned to training with the team this week and participated cautiously in training. His injuries are because of excessive loads. But it must be taken into account that the team recently played consecutive games.”

Shabab Al Ahli player Eid Khamis said : “We are going to play a strong match against a very good team. It will be a test of character all the players after consecutive losses.

In the other match of the day, Ittihad Kalba will look to ease relegation fears against Fujairah. Kalba are at the 11th spot two places above their counterpart Fujairah, who are second form the bottom at 13th in the 14-team league.

However, this is crucial match for both the teams as only point separates three towards the bottom half of the standings.

Kalba coach Dasilva said: “ I think the preparations were good. We desperately need to win this match and achieve three points. We are looking for an away win that will boost the morale of the team.

“We know and realize how important and difficult a is this derby. I think it will be the beginning of a comeback to the winning ways and scoring the most important three points against a rival team,” he added.