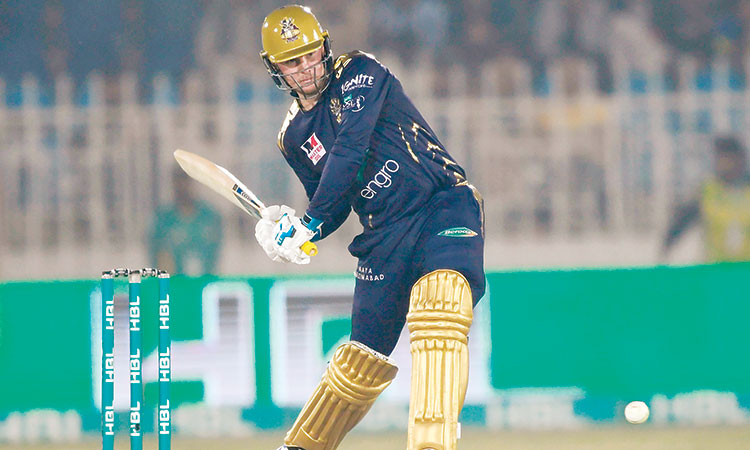 Gladiators’ victory has given them the top-spot in the HBL PSL 2020 points table. They have won three out of their four games and have six points after the end of the ninth match of the tournament.

Set a stiff 188-run target, Quetta Gladiators were helped past the target by an unbroken 57-run partnership between man-of-the-match Ben Cutting (42 not out, 17 balls, two fours, four sixes) and Mohammad Nawaz (25 not out, 20 balls, three fours).

Cutting made the difference by scoring 17 runs off the 18th over of the Gladiators’ chase when they needed 33 to win at the start of the over. Rumman Raees conceded a mere five runs in the penultimate over to bring United back in the hunt but Cutting finished the game off through back-to-back sixes off Amad Butt’s final over to take his side over the line with two balls spare.

The foundation of the Gladiators’ chase was laid by opener Jason Roy (50 off 38) and captain Sarfaraz Ahmed (33 off 20). Gladiators were in a spot of bother when Sarfaraz was dismissed by Faheem Ashraf, which left Gladiators needing 55 off the last 29 balls. However, Cutting’s heroics helped them secure a vital victory which has taken them to the top of the six-team table.

Ahmed Safi with two wickets for 17 runs in three overs was the pick of the United bowlers.

Earlier, Sarfaraz won the toss and opted to field first. United got off to a blazing start as Luke Ronchi took 11 runs off the first over bowled by Sohail Khan. His innings though was nipped in the bud by fast-bowler Naseem Shah who demolished his stumps with a fast yorker on the first ball of the second over.

Naseem then took another prized wicket when he breached Dawid Malan’s (10) defences sending the stumps flying again. Colin Munro was the third wicket to fall, he went after a quickfire 31 off 20 balls (two fours, three sixes) leaving United at 56 for three in the sixth over.

Ingram held the innings together as United lost quick wickets at the other end. The left-hander stayed at the crease till the end of the United innings to propel them to 187 for seven.

Ingram scored 63 off 40 balls (six fours, two sixes) to register his first fifty for United in his third match of his first-ever season with the franchise.

Naseem with figures of two for 23 in four overs was the pick of the Gladiators bowling line-up.

Meanwhile, in a ground-breaking move by PCB it is for the first time that the PSL matches are being played in Multan and Rawalpindi. Multan Sultans hosted Peshawar Zalmi at the Multan Cricket Stadium on Wednesday and Islamabad United took on Quetta Gladiators at the Pindi Cricket Stadium on Thursday.

A total of 11 matches will be shared between the two cities with Multan Cricket Stadium set to host three; Rawalpindi Cricket Stadium will stage eight matches. Batsmen and bowlers from both home and away sides are excited to take their guards and mark their runs ups at the two venues.

The stadium in Multan has so far hosted five Tests and seven ODIs. The first-ever match at the venue was played in August 2001; Pakistan defeated Bangladesh by an innings and 264 runs in the longest format of the game.

Rawalpindi Cricket Stadium has so far staged 10 Tests and 23 ODIs. The first international match here was an ODI between Pakistan and Sri Lanka which the hosts won by 117 runs.

Both venues are yet to stage a T20I; however they have played host to multiple National T20 tournaments.