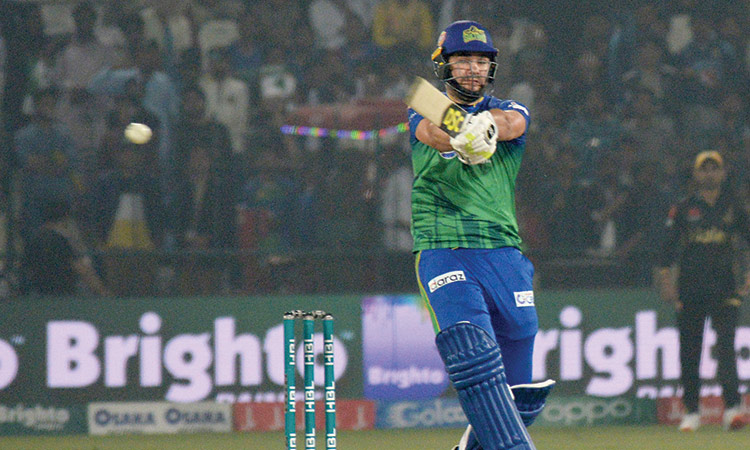 Chasing 124, they completed their victory with 31 balls to spare after they lost their fourth wicket at 47 in the seventh over.

Rilee Rossouw and Khushdil Shah rescued the Sultans and steered them to win with an unbeaten fifth wicket stand of 77-runs.

Zalmi managed to set a target of only 124 after losing early wickets.

Though Haider Ali looked in impressive form, making 47 runs off 27 balls, he couldn’t find a steady partner in the batting lineup as wickets kept falling at the other end.

With the Zalmis failing to build momentum at any stage in the innings, the 2017 PSL winners were all out for 123, with nine balls to spare.

Tom Banton was an early casualty after a superb catch by Shahid Afridi in the middle of the first over, scoring only four runs from five balls.

Zalmi’s Kamran Akmal was also sent back to the pavilion in the third over after being caught out by James Vince off Sohail Tanveer.

Shoaib Malik and Liam Livingstone were sent packing at the start of the fifth over by excellent bowling from Mohammad Ilyas.

Tanvir returned to dismiss Haider Ali, caught by Rilee Rossouw in the 11th over, and Hasan Ali, caught by Ilyas in the 17th over. Tanvir was the pick of the bowlers, accounting for four wickets.

After seven T20 matches have been played at Karachi and Lahore, the tournament now has been shifted to Multan and Rawalpindi where seven matches will be played from Feb.26 to March 2.

Multan is hosting its first ever match in the PSL history today (Wednesday).

Peshawar Zalmi have appeared in all the four previous editions of the PSL and hold a good record. They lifted the trophy in 2017 and finished as runners-up in 2018 and 2019.

On the other hand, Multan Sultans are playing for the third time in the PSL since 2018, and they were placed fifth position in their both the appearances in 2018 and 2019.