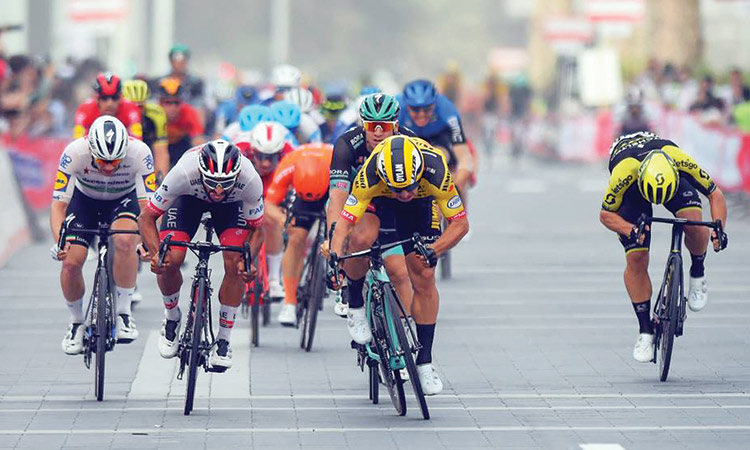 Fernando Gaviria (second left) of Team UAE in action along with other competitors during the fourth stage of the UAE Tour.

Dutchman Dylan Groenewegen won the fourth stage of the UAE Tour on Wednesday in Dubai in a sprint.

Briton Adam Yates finished in the pack with the same time and retained the leader’s jersey. The flat 173km stage round Dubai City ended in a mass sprint.

“This one is really nice, all the sprinters are here,” Groenewegen said.

Coming out of the last corner Groenewegen followed Sam Bennett, who attacked from a long way out. The Dutchman then followed the wheel of Fernando Gaviria of UAE and before surging past.

The Colombian fought back but Groenewegen was already sitting up as he crossed the line followed by Gaviria and Bora’s German Pascal Ackermann.

“The team did a very good job in the last 3km,” said Groenewegen.

“They did a really strong lead-out to bring me to the last corner. Then I was on the wheel of Bennett and, yeah, it was a good position.”

Groenewegen added: “The sprint today went much better than the first one at the UAE Tour. It made it a really nice win. My plan for this year is to win as many races as possible. The Giro d’Italia will be very important for me. I hope to win a couple of stages in my first participation.”

It was his third win of the season after two stages at the Tour of Valencia. The Dutchman has four individual Tour de France stage wins but is planning to miss the race this season to make his debut at both the Giro d’Italia and Vuelta a Espana.

Mitchelton-Scott’s Yates built a 1min 7sec lead on Tuesday on the climb of Jebel Hafeet. The race returns to same mountain on Thursday for the climb that finishes a 162km stage.

The Red Jersey leader of the GC Yates said: “The time difference is never enough but I’m in a good condition and this climb [Jebel Hafeet] suits me as everyone realised yesterday. I hope to have the same legs tomorrow.

“Training is different to racing. I got confirmation that my training has been good for my first block of racing from here until the Tour of the Basque Country. Later I’ll target the Tour de France and the Olympics.”

Fernando Gaviria went head to head with some of the best sprinters in the world as he fought the bunch to take the wheel of Groenewegen (Jumbo-Visma) in the final metres of Stage 4, just missing out on victory to the Dutchman in a tense finale.

Gaviria was a faller in a low speed crash in the peloton earlier in the race but recovered and finished well in another close sprint all the way to the line.

Tucked in behind and looked to move out with 50m to go, it was too late for the fastman as he takes his first podium of the tour.

Gaviria said: “It was a fast stage with a tail wind for most of the day. The team worked well together and were always by my side. We went for the win and we came very close. The level of sprinters here is very high so I’m pleased with my result and it gives me confidence for the next sprint to know that the form is there.”

No change in the GC as the team managed to keep Tadej Pogacar and Diego Ulissi both out of harm’s way with the Slovenian remaining in second place and Ulissi in the top ten. Pogacar also keeps the white jersey for tomorrow’s stage 5.

The Al Ain Stage on Thursday sees the team return to the mountains. A familiar route to the former Abu Dhabi tour that passes many of Al Ain’s biggest attractions including Al Ain Zoo, Al Qattara, Al Hili and Al Ain Oasis.

The stage finishes with the second Jebel Hafeet ascent of the week where Tadej Pogacar will be looking to make his mark after placing second in Stage 3. Final climb that winds its way through wide-ranging hairpin bends on a 3-lane roadway with slopes mainly around 8-9 per cent and a peak of 11 per cent three kilometers from the finish. It also feature very short descents in the last km before the last ramp and an Asphalt finish straight. 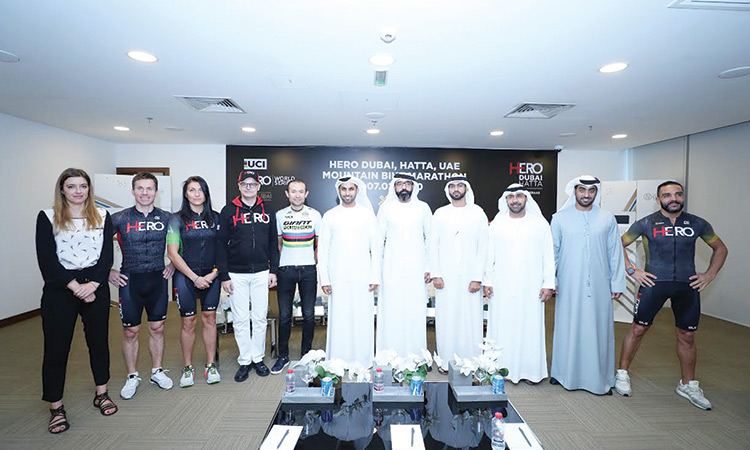 Bikers representing 20 countries will be in action when Dubai will host the opening leg of the Hero World Series 2020 next month. The three-day event is scheduled to be held in Hatta, 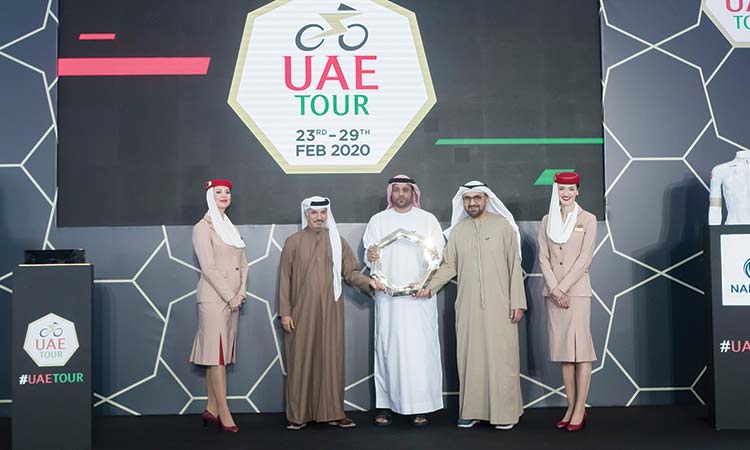 With Mark Cavendish, Rohan Dennis and 2018 World Champion Alejandro Valverde among the marquee list of riders, the route and jerseys for the second edition