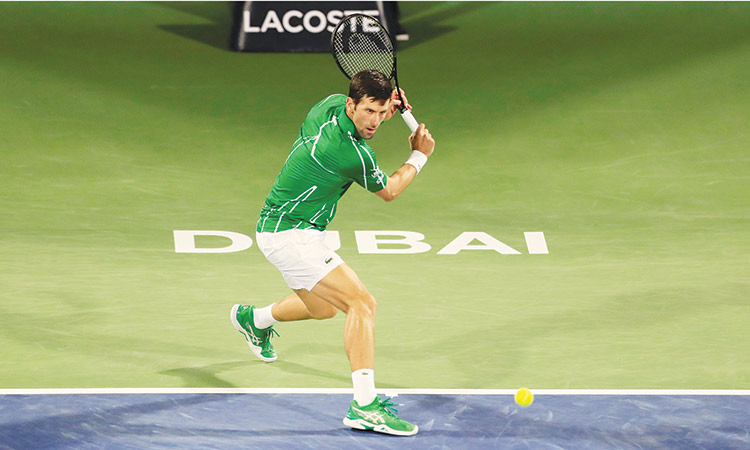 There were wins too for third seed Gael Monfils who ended the run of qualifier Yasutaka Uchiyama 6-1 6-2, and sixth seed Andrey Rublev who survived a set point on the way to a 7-6 (3) 6-0 win over Filip Krajinovic. Seventh seed Karen Khachanov defeated qualifier Dennis Novak 6-3 6-4, but number eight seed Benoit Paire was beaten 6-4 6-4 by Richard Gasquet in an all-French clash.

Djokovic had lost his most recent match against Kohlschreiber almost a year ago at Indian Wells, but victory this time was never in doubt. The reigning Wimbledon and Australian Open champion did not face a break point in the entire match, and although only one break of serve at 3-2 decided the opening set he eased through the second.

“Look, I thought I was very sharp from the beginning mentally,” said Djokovic, who is seeking his fifth Dubai title and first since 2013.

“Took me a first few games to really kind of get used to the tricky conditions today. It was pretty windy on the court, even though maybe it doesn’t seem like that from outside. The wind was changing directions all the time. It was not really easy to get the rhythm. It was completely different from any other day. Philipp is a tough opponent. You have to take him seriously regardless of his ranking (world number 80).

“He’s someone that has tremendous experience of playing on a big stage. He’s played so many big tournaments in his life, big matches. He actually likes this kind of challenge.

“I knew coming into this match I have to be sharp, stay focused all the way till the end, not allow him to feel like he has a chance to come back to the match if I’m in front. That’s what happened.

“I thought the second set was really, really good. I felt great on my service games. Everything was flowing really nicely. The return games I was putting constant pressure on him.”

Tsitsipas was never able to take control over Bublik, but emerged from pressure moments well. He failed to convert two set points before Bublik held to take the set to a tiebreak, but swept that with ease. And in the second set he fought off three break points when down 3-4 and then earned the only break of the match at 4-4 before serving out for victory.

“Yeah, also had a lot of breakpoints which I didn’t play very smart,” said Tsitsipas, who will next play Jan-Lennard Struff who took just 39 minutes to overwhelm Nikoloz Basilashvili 6-1 6-0.

“They came quite different. I mean, his dropshots were good today. Yeah, he likes to serve and volley. He did quite well keeping in the game and surprising me most of the time. But, yeah, it’s a tough Stefanos that managed to find ways in these tough moments to apply pressure and not let go.”

Rublev was always playing catch-up with Krajinovic throughout the opening set and the Serbian held a set point at 5-3. And even though Rublev won the next three games and served at 6-5, he too failed to secure the set until taking control in the tiebreak. In contrast to the 74-minute first set, the second saw Krajinovic salvage just 10 points as he was no longer able to mount a challenge.

“Yeah, was really tough first set,” said Rublev. “He was twice with a break. I think 4-1 then 5-3 serving. He had set point. It was really tough match. The first set I think was the main one. After the first set we saw that he was really tired. That give me even more - how you say - more confidence to play. That’s why the second set was more easy.”

Rublev will next face Daniel Evans, who followed up his first round upset of fourth seed Fabio Fognini by fending off three match points to overcome Pierre-Hugues Herbert 7-5 3-6 7-6 (7). Evans trailed 5-2 in the first set before sweeping the next five games and then winning the first two games of the second, but he then surrendered six of the next seven games as Herbert levelled the match. After an early exchange of breaks in the third, Herbert then led the tiebreak 6-4 and 7-6 before Evans closed out the match to end their two hour 46-minute battle.