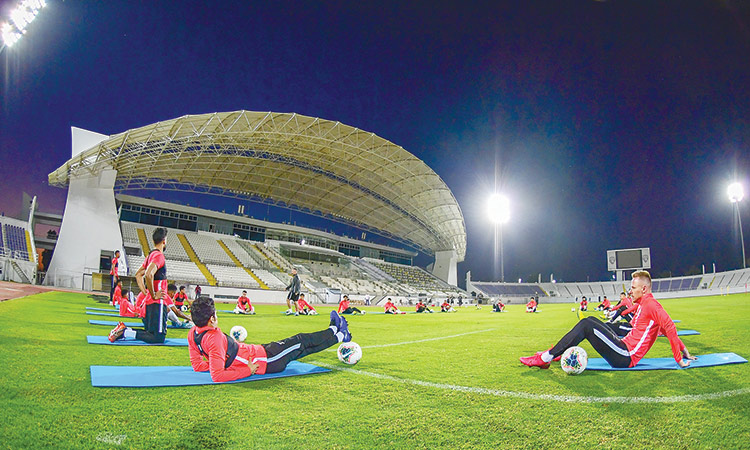 Al Ain players attend a training session ahead of their match against Hatta.


Al Ain will look to close gap on leaders Shabab Al Ahli when they take on Hatta in the 17th round match as the Arabian Gulf League (AGL) resumes on Thursday after a three-week break.

Al Ain, who are on the second spot with 31 points behind Shabab Al Ahli, can provisionally curtail the lead to two points with victory over less-fancied Hatta as the leaders are not in action until Friday.

Al Ain’s Portuguese coach Pedro Emanuel predicted a tough match against Hatta, who are at the 12th spot with just 12 points from 16 matches.

“Match against Hatta will not be an easy one. They are a good team and always look to win. When they play at their home ground, they become more dangerous.

“We must show our real strength and remain focus from the start to the end. We want tomaintain the winning the momentum and are aware what is expected of us.

“The next game is very important and our goal is to achieve the three points while respecting the aspirations of the opposing team,” he added.

In response to a question about his team’s qualification to the semi-final of the President Cup with a 6-5 win against Al Wasl in an 11-goal thriller, he said: “I mentioned before that winning always gives the team the motivation. It is certain that Al Wasl’s game was totally different from the league matches.

“In the knockout matches there is no second chance, therefore, we had to show the spirit of fighting from the beginning to the end.

“We achieved our goal against Al Wasl. The match showed that the competition includes strong teams. No games are not easy and our focus is currently on the league competition,” he stressed.

Meanwhile, Al Dhafra coach Vuk Rasovic said they are wary of Ajman ahead of their match on Thursday.

“Ajman is a fierce competitor and we have to be focused and serious throughout the game,” said Rasovic.

Citing concern about the injuries in the team, he said: “There are several players, who are battling injuries. Abdel Rahman Youssef, Khaled Butti, Yassin Al Bakhit, Joao Pedro, Muhammad Hamdan Al Zaabi are likely to miss the game if they do not recover in time.”

Rasovic added: Ajman have proven their strength through the results achieved in the current season. There best quality is that they never surrender and take the fight till the end,” he explained.

He added: “I respect the Ajman team but we are confident of winning because we have a good set of players.”