Tsitsipas advances into the next round; Evans spoils Fognini’s debut - GulfToday 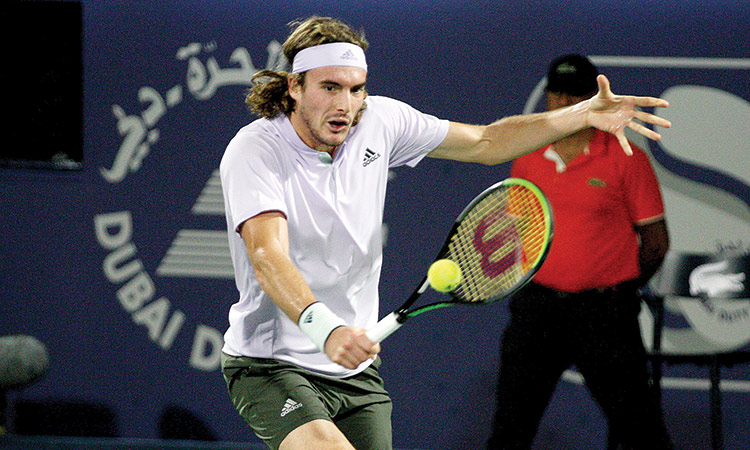 The Greek star Tsitsipas, who finished as runner-up ib Dubai last year, took one hour and 34 minutes to get the better of Spain’s Carreno Busta at the Centre Court.

“I was tired. I was upset with myself a little bit when I was trailing and didn’t get the break. I realised I have to save that energy. Even in the beginning of the match I felt tired,” said the ATP Finals champion.

“I tried to stay calm and not complain too much because I would definitely need that energy for later on in the match.

“I think I focused on constructing the points, staying in the point, trying to make things happen from my backhand side because that’s what I felt he played most of the time,” he added.

On Sunday the World No.6 beat Canadian teenager Felix Auger-Aliassime 6-3, 6-4 to win the Marseille Open for the second time in a row and headed to Dubai.

Daniel Evans recovered from one set down to spoil the debut of fourth seed Fabio Fognini.

The World No.37 from Great Britain beat the 11th ranked Italian 3-6, 6-4, 7-5 in two hours and 40 minutes. After losing the first set, Evans bounced back in the second. He broke Fognini in the third and later won five of the final six games to take the second.

Both players lost serve twice in the third set before the Brit converted his sixth match point to wrap up the battle.

Evans will now face Pierre-Hugues Herbert in the second round after the Frenchman defeated Japan’s Yoshihito Nishioka 7-5, 6-2.

“It’s difficult to play Fabio (Fognini),” said Evans. “I am just happy to come through really. It was a good battle. I didn’t actually get to play my game too much, but it was good. I felt like he was on top forever really. I was just hanging in.”

Eighth seed Benoit Paire fought off four match points before overcoming former US Open winner Marin Cilic 2-6, 7-5, 7-6 (7/1) to advance into the next round.

Making a stunning comeback, Paire prevailed over former World No.3 in a battle that lasted for more than two hours and was a replay of their three-hour, 33-minute showdown that took place at the Australian Open last month.

The victory ends a five-match losing streak for Paire against Cilic. The World No. 21’s only previous win against Cilic came in 2013 in Pune.

Cilic, a 2014 US Open champion, started off well and with the help of two breaks went to win the first set 6-2.

The Croatian served for a straight sets win at 5-3 and held two match points, but the Frenchman broke back immediately and won the next four games and the set.

Cilic then held two more match points at 6-5 in the third set, each of which Paire saved with an ace before he went on to dominate the tie-break.

“It was not easy today. I lost five times in a row against Marin (Cilic). Lost against him in Melbourne 7-6 in the fifth. I was not confident before the match,” said Paire.

“I am really happy about the win. It was not easy today. I was not feeling really good on court. I have been a little bit sick for the past three days. Normally when it’s one set, 5-3, I normally tank. This time I tried until the end,” he added.

“The only thing is when you play against Marin, he was top 10, he won a US Open, he won a lot of big tournaments, he is not seeded here, and honestly he’s very good player. I knew it will be difficult to beat him today. But that’s what I did.”

The World No. 21 will next meet countryman Richard Gasquet for a spot in the quarter-finals. Gasquet advanced to the second round with a 6-4, 7-5 win against Marton Fucsovics on Monday.

Two qualifiers also reached the second round as Dennis Novak defeated Prajnesh Gunneswaran 6-4, 6-3 and Yasutaka Uchiyama beat Yen-Hsun Lu 3-6, 6-1, 6-2. Lu was playing only his second match since May 2018 after suffering from a right shoulder injury, and only his fourth tournament since 2017.