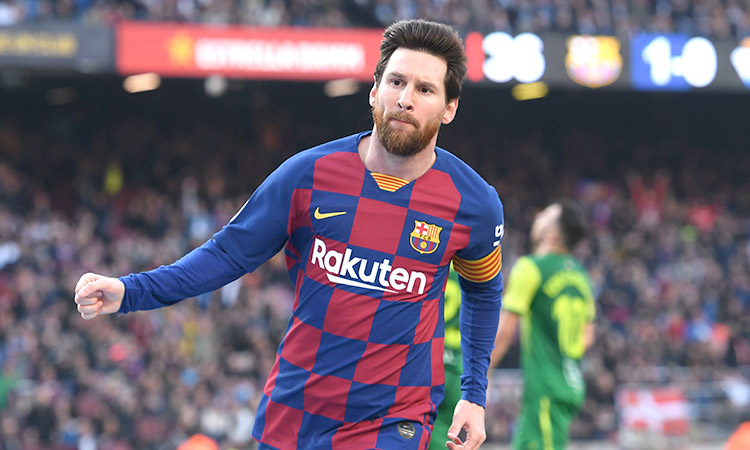 Messi has scored seven quadruples in his career which has underlined his ability to drag the troubled team through even in the most turbulent of periods.

Lionel Messi has said Barcelona are not playing well enough to win this season’s Champions League but his four goals against Eibar on Saturday were a reminder that with him there will always be hope.

Barca play Napoli in the first leg of the last 16 on Tuesday and will be expected to go through, even if their opponents are on a strong run, having won six out of their last seven matches, including victories over Juventus and Inter Milan.

Yet despite a whirlwind couple of months of political wrangling, remarkably Barcelona approach this tie sitting top of La Liga and with a spring in their step, in large part due to Messi.

His quadruple in the 5-0 rout at Camp Nou on Saturday was cathartic and not only because Real Madrid, whom Barca face in the Clasico on Sunday, failed to regain first place after losing to Levante a few hours later.

“It was a win we needed,” said coach Quique Setien.

Messi has scored seven quadruples in his career but none executed amid such an intense time of pressure, with the spotlight on the Argentine.

While other players might have sulked or crumbled, Messi delivered with another breathtaking performance that underlined his ability to drag this troubled team through even the most turbulent of periods.

“He’s been in this form for 14 or 15 years and he keeps performing like this,” said Setien.

“He’s a guarantee for any club and for any coach and that’s what makes him the best player in the world. He can do things that others can only dream about.”

Messi could have had many reasons to feel upset but he hasn’t let them affect his performances.

Barcelona’s board sacked Ernesto Valverde last month, despite Messi’s public backing three days before, and failed to sign a striker in the transfer window with Luis Suarez and Ousamane Dembele both out injured.

The club’s technical secretary Eric Abidal then said the squad were the main reason for Valverde’s departure while the president, Josep Maria Bartomeu, has been accused of hiring a PR company that criticised key players, including Messi, in a bid to improve his image online.

Barcelona have denied the allegations but when asked in an interview with Mundo Deportivo last week if he was convinced, Messi said he would wait to see if they were true.

He also admitted, “the way we are at the moment, I don’t think it’s enough to win the Champions League” and identified Real Madrid, Juventus, Paris Saint-Germain and liverpool as greater threats.

Setien was more optimistic on Friday. “There are things that I agree with and others evidently... I have seen every year how Champions Leagues are won and I think we could have the same chance as other teams,” he said.

“It is true that there is no margin for error and there are things we have to try to improve and do better. We are not happy with everything but I think we are growing little by little and we are reaching levels that will allow us to challenge.”

Yet if Messi were to win the Champions League this season, it would surely represent one of his most impressive achievements.

With the likes of Frenkie de Jong and Arthur Melo in midfield and the excellent Marc-Andre ter Stegen in goal, they do not lack for talent but weaknesses in defence remain, not to mention a fragility against the counter-attack.

And by appointing Setien, a coach devoted to a very particular style, Barcelona are having to change mid-season, with Setien admitting this month that it would take time for the players to understand his methods.

“It’s not easy,” said Messi. “We come from playing under Valverde to playing differently now and being asked to do something else. The truth is we are learning and we still have a lot to learn.”

But with in-form Napoli fast-approaching and then Madrid to come at the Santiago Bernabeu, time is not on Barcelona’s side. For now, they will look to Messi.