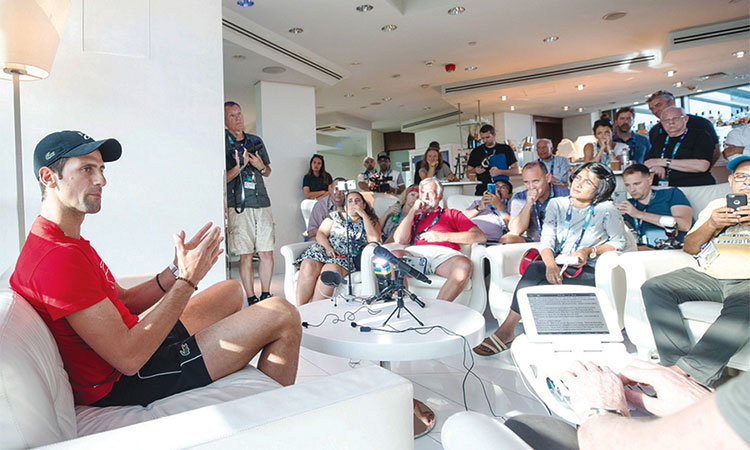 Novak Djokovic speaks during a press conference in Dubai on Sunday.

Swiss defending champion Federer was forced to withdraw after this week undergoing right knee surgery which will reportedly keep the 20-time Grand Slam winner away until the summer grass season.

“It was a surprise, to be honest,” Djokovic said prior to his Monday start against Tunisian wildcard Malek Jaziri.

“I knew he was struggling with an injury in the Australian Open. But no one knew really what was the injury, what is the extent of that injury.

“I really don’t like to see anybody going through surgery. I’ve been through that once, and hopefully the last time in my life.

“Roger is Roger — this sport needs him.”

“I’m looking forward to competing again at the tournament where I’ve done well in the past,” Djokovic said.

“I’ve been coming here during the pre-season for at least seven to 10 days of training before I head to Australia. There’s also a very big Serbian community here so big support on the stands. Can’t wait to kick off.”

Having started the season so well, winning the ATP Cup as well as the Australian Open, a run of 13 straight singles victories plus two in doubles, his confidence is naturally high.

“Of course, I mean, when you win a Grand Slam at the beginning of the season, I’ve been lucky to win so many Australian Opens, that always started off my year in a great way, in a very positive manner, gave me a lot of confidence. I know that every time I would win Australian Open I would have a great season after that. Hopefully that can be the case again.

“I’m aware of the streak. I’m aware of the fact that I’m feeling great on the court. Of course, when you win that many matches, it translates to your high level of confidence. But I’m aware that it could easily be disturbed, as well, and lost. I try to approach every tournament and every match as a fresh start basically. Continuation of the great streak, yes, from the confidence perspective, but fresh start game-wise.”

He will play Tunisian wild card Malek Jaziri at 7pm on Monday, and saw his opponent’s reaction at the draw ceremony when he discovered who he would play.

“We are good friends,” said Djokovic.

“We got along very well since I came on the tour. He was very nice to me. We know each other well. We trained a lot in Dubai actually, of course the other tournaments. I’ve played him here four, five years ago. Yeah, it’s quite odd for him to always draw first seeds so many times. He’s going to get probably a lot of support, as well.

“He’s a very nice guy, very talented. He has a good serve, forehand, plays a lot of slice, mixing up the game. He has a great touch. Obviously these kind of match ups, he doesn’t have much to lose. He’s going to go out, he’s going to try, probably come out with some shots and a game that will probably disrupt my rhythm, use the momentum, use the crowd the first match. That’s why I take it very seriously. I will try to prepare for that one best possible way.”

Seeded second after Djokovic is Stefanos Tsitsipas, who takes on Spain’s Pablo Carreno Busta after flying in straight from beating Felix Auger-Aliassime to the Marseille title.

Djokovic also called on the rival ATP and Davis Cups to combine in order to survive.

Djokovic, who recently won his eighth Australian Open title and led Serbia to the ATP Cup trophy last month, made his plea prior to starting this week as top seed at the Aviation Club.

“In my opinion, they have to merge,” the world number one said of the two competitions, which are held less than two months apart at the end of one season and the start of the next and he believes should become “one super cup”.

“That’s necessary because for me personally it will be very difficult to play every single year both competitions, so I’m going to have to choose,” said the 32-year-old, president of the ATP Player Council.

“I don’t think this is (a) sustainable model for our tennis.”