Kings beat Zalmi by 10 runs in a thriller; Quetta start campaign with victory 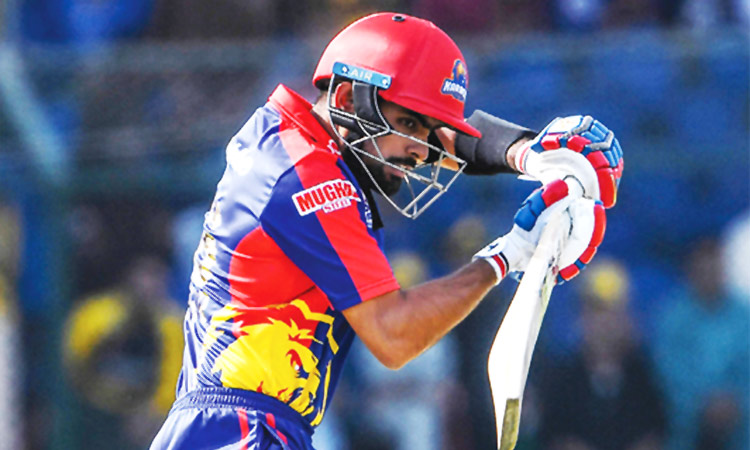 Karachi Kings’ beat Peshawar Zalmi by 10 runs in thrilling clash of the Pakistan Super League 2020 held at the National Stadium in Karachi on Friday.

Peshawar won the toss and asked Karachi to bat first. In-form Babar Azam top scored with 78 from 56 balls while skipper Imad Wasim blasted a 30-ball 50 to help the Kings set a daunting target of 202 for the loss of four wickets.

In reply,  Peshawar Zalmi couldn’t get off to a quick start as their overseas batting sensation, Tom Banton, got out without doing much damage. Haider Ali and Shoaib Malik also failed to get quick runs, however, Kamran Akmal kept his team in the hunt with a 26-ball-43.

English batsman, Liam Livingstone, hit some big sixes in his innings. His partnership with Darren Sammy brought the game close as they needed 30 from 12 balls. With 6 balls to go, Peshawar needed 16 to win with two pinch hitters on the crease in the form of Sammy and Livingstone.

Umaid Asif got to bowl the last over even though Imad had two overs left. He held his nerve, giving away only 5 runs while taking two wickets off the last two balls. Karachi won the match after a close contest by 10 runs to register their first.

Peshawar are one-time winners of the PSL, as they won the coveted PSL trophy in the second edition in 2017. They have been the runners-up for the last two consecutive years, 2018 and 2019.

On the other side, Karachi have not been able to win the tournament nor have they ever been runners-up. They achieved the fourth position in the first and the fourth editions, in 2016 and 2019, and were placed third in two successive editions, 2017 and 2018.

Batting first Islamabad received a jolt on the tournament’s first ball when Colin Munro was caught and bowled by Mohammad Nawaz.

Dawid Malan and Luke Ronchi tried to rebuild their innings and added 38 runs in 22 deliveries before the latter was caught at backward point off Sohail Khan after scoring 23.

After Ronchi’s fall, it was Malan’s turn to take the charge and he did so by scoring some quick runs. He added 68 runs for the third wicket before his partner, Hussain Talat (19), was caught by Ahmed Shahzad off Mohammad Hasnain.

Colin Ingram was next to go and his wicket was followed by Malan’s departure. Malan scored 64 off 50, smashing five fours and three sixes as Islamabad lost their last six wickets for just 41 runs.

In reply, Quetta also lost three wicket wickets early. Jason Roy (0) and Ahmed Shahzad (7) were sent back to pavilion by Mohammad Musa while Shane Watson was run out after scoring 15.

Captain Sarfaraz Ahmed and Azam added 62 runs for the fourth wicket partnership and laid the foundation for Gladiators’ victory.

Azam scored the highest at 59 runs, while Sarfaraz and Sohail Khan added 21 and 18 runs, respectively, before Ben Cutting (22 off 12) smashed a six off Shadab Khan on long-off to complete Quetta’s win with nine balls to spare.