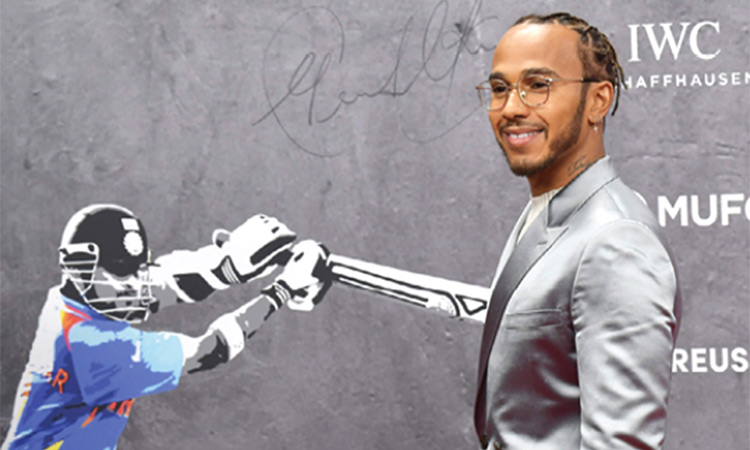 Lewis Hamilton poses on the red carpet as he arrives for the Laureus World Sports Awards in Berlin on Monday. Agence France-Presse

Berlin: Football superstar Lionel Messi and reigning Formula One champion Lewis Hamilton shared the top honours at the Laureus sportsman of the year award in Berlin on Monday.

Hamilton, who has won six Formula One world titles and Barcelona swashbuckling star Messi were honoured for their achievements in 2019.

The award witnessed many first in its two-decade history since its inception. Not only Messi became the first footballer to win the award but also for the first time jury declared the two winners after reaching a tied decision.

“I am honoured to be the first to win this award being a sportsperson coming from a team sport,” Messi said from Barcelona via a video message.

Earlier, Messi also bagged the a record sixth Ballon d’Or award for his exploits with Barcelona and Argentina in 2019.

Just a year ago, Messi dropped down to fifth in the voting as Luka Modric claimed the gong, but the Barca superstar has been back to his best in 2019.

He had stellar year wherein Messi scored 46 goals across all competitions in 54 appearances.

He also provided 17 assists in those games, meaning he averaged a goal or assist every 0.86 appearances.

That win rate saw him become the player with the most La Liga victories (346, overtaking Iker Casillas) and the most victories in Barcelona’s history (496, overtaking Xavi).

By winning his 10th La Liga title with Barcelona, Messi claimed the 34th trophy of his career, meaning he has won more silverware than any player in Barcelona’s history.

Meanwhile, US rising gymnastic star, who fascinated the world with her enchanting  performances across the world, took the top honours in the women’s category for the third time. Biles won five titles at the 2019 world championships in Stuttgart to leave her with a record 25 world gold medals.

“It means the world to me, this is my third Laureus award and I’m really grateful,” said Biles in a video message.

South Africa, who won the 2019 World Cup, were named team of the year, beating Jurgen Klopp’s Liverpool and the US women’s football team.

“With this group of players, we came together for the love of the game with one goal and fought so hard for each other,” Kolisi told the audience in Berlin.

“We gave everything we had to win the trophy and hopefully inspire kids for generations to come.”

Oksana Masters, who was born with limb impairments caused by radiation from Chernobyl and was later adopted in the US, won the sportsperson with a disability award.

She also won silver medals in the road race and time trial H5 at the para cycling road world championships.

Colombia’s Egan Bernal, 22, who became the youngest rider to win the Tour de France for 110 years, won the breakthrough award after winning the world’s top cycling race in what was only his second three-week classic event.