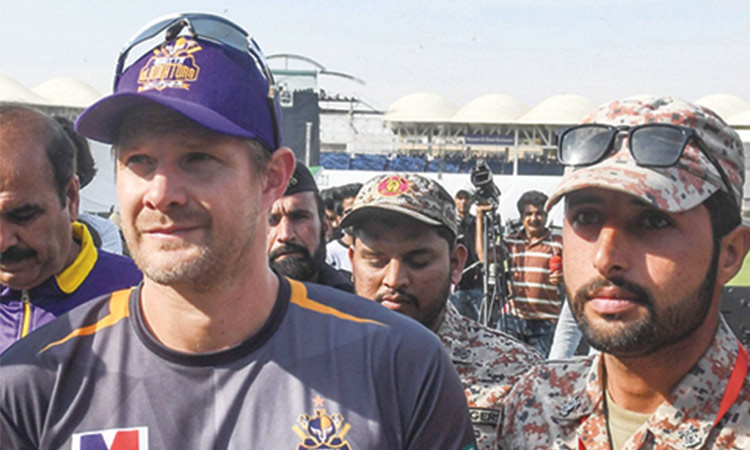 A ranger (right) escorts Quetta Gladiators’ Shane Watson as he leaves the ground after a practice session for the Pakistan Super League (PSL) at National Stadium in Karachi on Tuesday.

Fast forward to 2020, the fifth edition of the PSL witnesses a remarkable surge as 36 foreign players, including Darren Sammy of the West Indies and Shane Watson of Australia feature in the line-ups of the six franchises, when the tournament gets under way on Thursday.

“The foreign players coming is a huge bonus for us,” Pakistan Cricket Board (PCB) chief executive Wasim Khan said.

“It’s a massive step forward because they (foreign players) clearly believe that it’s safe to be here for 4-5 weeks.”

It took Pakistan 10 years to take cricket back home since a terrorist attack on Sri Lanka cricket team in Lahore in 2009.

Pakistan hosted all their home series in the UAE following the attack, which left the cricket-mad nation deprived for almost a decade.

For this T20 event, the PCB has worked with the Federation of International Cricketers Association and also shared its security plans with foreign stars to make them feel safe in Pakistan.

“We firmly believe now that we are in a good position,” Wasim said.

“We’re delighted there are so many players coming here and it’s a great endorsement for us as a country.”

Pakistan cricket went into isolation for more than six years after the attack near Gaddafi Stadium in Lahore in 2009. There was a ray of hope in 2015 when Zimbabwe toured for limited-overs series but it wasn’t enough for the Pakistan to host its first PSL tournament the following year, forcing organizers to stage it in the UAE.

In 2017, the PSL final was played at a packed Gaddafi Stadium, in stark contrast to the group-stage matches that were contested in mostly empty venues in the UAE.

Over the next two years, a World XI, Sri Lanka and the West Indies also played limited-overs matches in Pakistan, and more PSL games were staged in Lahore and Karachi.

The PCB overcame another barrier when it hosted test matches last year in Pakistan for the first time in a decade. Pakistan successfully hosted two tests against Sri Lanka in December and, after a lot of negotiations, last month managed to convince Bangladesh to play a test in Rawalpindi. All the ‘cricket comes home’ activities, of course, require heavy security surrounding the foreign teams, with the kind of armed security and road closures usually reserved for visiting heads of state . Visiting players have had virtually no movement outside the team hotels or match venues - although a few Sri Lanka players went to a shopping mall while they stayed in the federal capital.

But Wasim believes that over time, the blanket security can be eased and players will feel more relaxed.

“Certainly it’s something that we are looking at,” he said. “The more we play at home, the more confidence people have, the better it will become. We certainly can’t sustain state-level security.”

More freedom of movement for visiting players and ensuring costs for security don’t overburden federal and local governments has to be balanced, Wasim said, with “making sure we never become complacent and we provide the right level of security.”

In a bid to reassure cricket officials from countries such as Australia, England, New Zealand and South Africa about the security situation, Pakistan invited the Marylebone Cricket Club - the guardians of the laws of cricket - for limited-overs matches in Lahore.