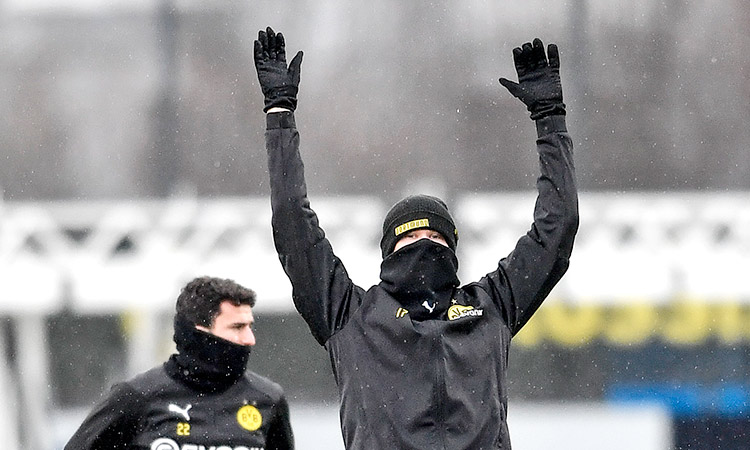 Atletcio, who once used to relish such contest, need a performance that they have not delivered so far this season to overcome the challenge.

They are no longer the same side, which once boasted of inch-perfect defence, relentless work ethic and a knack for grinding down even the most assured, attacking teams of the world.

With a string of underwhelming performance in the last few month, both Atletico and coach Diego Simone have come under scanner, especially after going six-point adrift to the leaders and city rivals Real Madrid.

They are sitting on sixth in the Spanish League, which is a reflection of their dwindling prowess and performance both.

When it was pointed out to Simeone on Friday that both of Valencia’s goals in their 2-2 draw at Mestalla had come from set-pieces, he said: “We don’t have the same characteristics now. Just like we attack differently, we also defend differently.”

Out of the title race before March and knocked out of the Copa del Rey before the last 16, many in Spain believe Atletico’s season is in tatters, with the assumption they will soon depart the Champions League too.

The debate has inevitably turned to Simeone and whether he remains the man to better those high standards he himself has set.

“In the eight years I’ve been here, every year it’s been said the squad isn’t with me,” Simeone said in December.

“There is always a rocky patch but I have always had patience, energy and confidence in what I believe. We can win or lose but I am convinced of what I want because I know my players.”

To prove the doubters wrong against Liverpool, Simeone will have to extract a throwback display from a new group of players and against the finest team in Europe, both in terms of current form and the last name written on the cup.

Meanwhile, Borussia Dortmund will be looking to keep the score low when it plays high-scoring Paris Saint-Germain on Tuesday in the Champions League.

Dortmund has been prolific itself lately, scoring 23 goals in its last five league games. But that has often been accompanied by sloppy defending. The German team has had a 5-3 win and a 4-3 loss so far in 2020.

PSG had its own defensive problems in a 4-4 draw with Amiens on Saturday.

Dortmund is hoping it has found a solution to its leaky back line, just in time to host PSG. The arrival of defensive midfielder Emre Can from Juventus in January has shored things up. Dortmund allowed Eintracht Frankfurt no clear-cut chances in a 4-0 win on Friday.

Dortmund coach Lucien Favre said Monday he is hoping for beauty on the field, but “a beautiful match can also be a match which has beautiful defending in it.”

Favre added he would be happy with a 1-0 win instead of a goal-fest. Axel Witsel pointed to Dortmund’s goalless draw with Barcelona in the group stage - a rare case of competent defending prior to Can’s arrival - as “the model” to follow.

“Tomorrow we’re going to have to be really compact, play as a team all together and really strong,” Witsel said. “We were against Frankfurt more aggressive in a good way. Straight away when we lost the ball we really wanted to recover the ball and play forward and it’s one of the things we will have to do tomorrow.”

Witsel said his new partnership with Can offers “more balance” in the midfield. Can is a classic defensive midfielder, Witsel said, rather than the more offensively minded Julian Brandt, who is injured. Dortmund could also field striker Erling Haaland in Europe for the first time.

The 19-year-old Norwegian has scored nine goals in six games in all competitions for Dortmund and eight in six for former club Salzburg in the group stage.